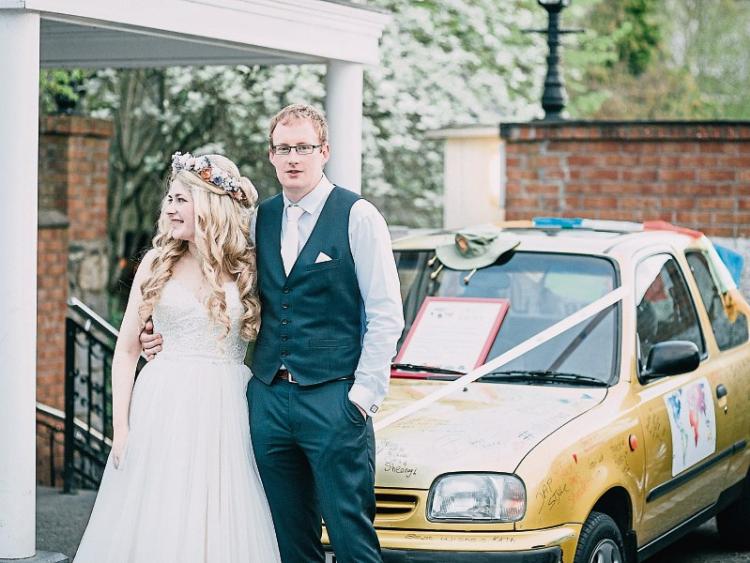 A couple who have most definitely been bitten by the travelling bug are this week trundling through Europe in their Micra on their way to Mongolia,

Shane Corrigan (who is originally from Bagenelstown) and Georgia tied the knot in April and set off on their honeymoon adventure last weekend.

“We are jumping into a gold 1996 Nissan Micra called Martha and driving her to Mongolia, and then we'll carry on travelling around the world. We are also raising money for Cool Earth, the official charity of the Mongol rally, and the Cystic Fibrosis Trust, in memory of our friend Asha,” explained Shane.

Last Saturday the couple arrived at Goodwood Motor Circuit for the launch of the 2017 Mongol Rally.

The couple plan to drive through Europe, Turkey and Georgia to Azerbaijan, and then to take a cargo ferry over the Caspian Sea to Turkmenistan. From there we will be touring the ‘Stans, passing through Uzbekistan and taking the Pamir Highway through Tajikistan and Kyrgyzstan to Kazakhstan.

The final section of the trip is the one Martha will find the hardest – driving 1,000 miles from the West of Mongolia to Ulaanbaatar. There are no roads, and Mongolia is the least densely populated country in the world.

From Ulaanbaatar we have a last stint to Ulan Ude in Russia where the rally finishes. From there we will be shipping Martha off to Lithuania and carrying on with the rest of our adventure.

Less than one week into their adventure the pair have already encountered a few minor obstacles.

“Our first stop was Dover. our only problem was that there was a major accident on the M25, which we tried to avoid by going cross-country around the South Downs.

“The scenery was beautiful, but it took us an hour longer than planned and we got stuck behind numerous slow moving vehicles, including a steam train. We didn’t get to Dover until 3.30pm, and had to wait until 4.40pm for the next ferry.

“Our plan to do another three hours of driving after reaching Calais was looking increasingly ambitious, and our Mongol Rally whatsapp group was pinging with news from other teams who had reached Amsterdam, Brugges and even Germany, while we were still yet to leave the UK.

“But, better late than never, we made it on to the ferry and found plenty of other teams going at much the same rate. We also heard that there had been some teams who were not doing so well, and had broken down between Goodwood and Dover,” said Shane.

The couple camped in Belgium on Sunday night, lunched in Luxembourg on Monday and are driving across Germany en route to Prague.

As well as receiving donations to support their two charities Shane and Georgia have also been overwhelmed by the level of support that they have got from local businesses.

“We have had some really great support from businesses across Kilkenny, mainly with supplying car parts,” said Shane.

If you would like to support the couple on their journey and fundraising endeavours you can do so at https://fundrazr.com

“In 2015 we lost our friend Asha when she was just 25 years old. Asha was, and still is, an inspiration – she lived with cystic fibrosis all her life but made the most of every day. We hope that by raising money for the Cystic Fibrosis Trust and Cystic Fibrosis Ireland we can help others with the condition to live longer and healthier lives,” they added.