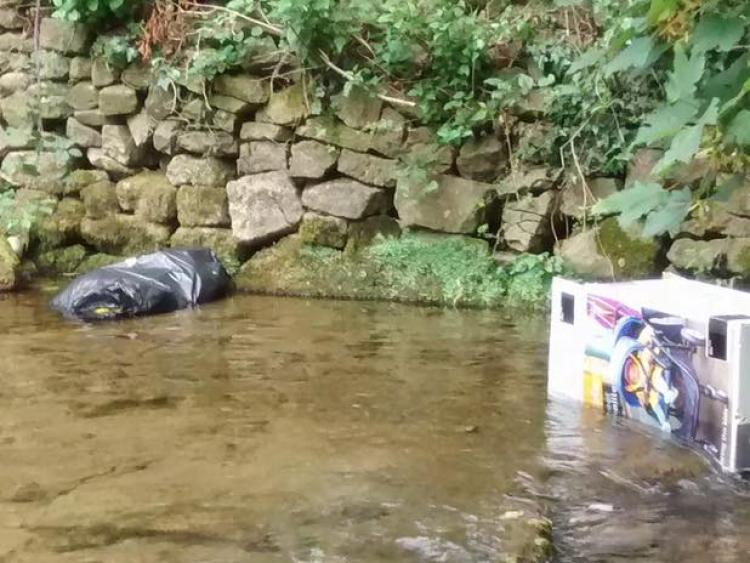 Fly-tipping in Freshford saw a “bag of dirty nappies” and a box of rubbish dumped in the river at Brewery Weir last month.

Locals have described the dumping as “terrible” with others calling the behaviour shameful in light of all the hard work being done by people in the town.

In a post on Facebook on July 18, Freshford Tidy Town said: “It is very disappointing that significant rubbish was dumped in the River Nuenna at Brewery Weir.

“This will be reported to the relevant authorities.”

This isn't the first time that illegal dumping has been a problem in the county with black bags dumped in the vicinity of The Black Abbey and Colliers Lane in Kilkenny City earlier this year.

Committee member Paddy Moriarty says Freshford Tidy Town has been “up and running” 14 months and there is a big effort being put in by locals.

He says between ten and sixteen people are out every Wednesday night to garden, paint or just generally tidy up the village and two people go out every Monday and Friday to water the flowers.

Reacting to the dumping, Mr Moriarty said: “There was a bag of dirty nappies and a box of rubbish.

“The Tidy Town committee were not one bit pleased with it. I went down and took out the box of rubbish.

“I wouldn't go near the box of nappies, I'd no gloves, it was terrible. We rang the council about it.”

Several people took to social media to voice their anger. One person on Facebook posted: “That's awful and such excellent work been done around the village.”

Another added: “That's disgraceful. Whoever you are, you should be ashamed of yourselves. No appreciation for all the work that's been done voluntarily.”

Kilkenny County Council confirmed to the Kilkenny People that the whole lot was removed on July 21 and the river was “clean and spotless” again.

The Council became aware of the dumping on July 19 and officially recorded it on July 20. The items were then investigated and removed the following day by the Council.

The items were a white cardboard box for a buggy – which had been taken out on left on the bank of the river - and a black sack full of nappies on the far side of the river.

The Council said there was no evidence in the black sack or white box.

Meanwhile, in February of this year, another spate of illegal dumping led to Kilkenny County Council saying the scale of fly-tipping was "not experienced in years" in Kilkenny City.