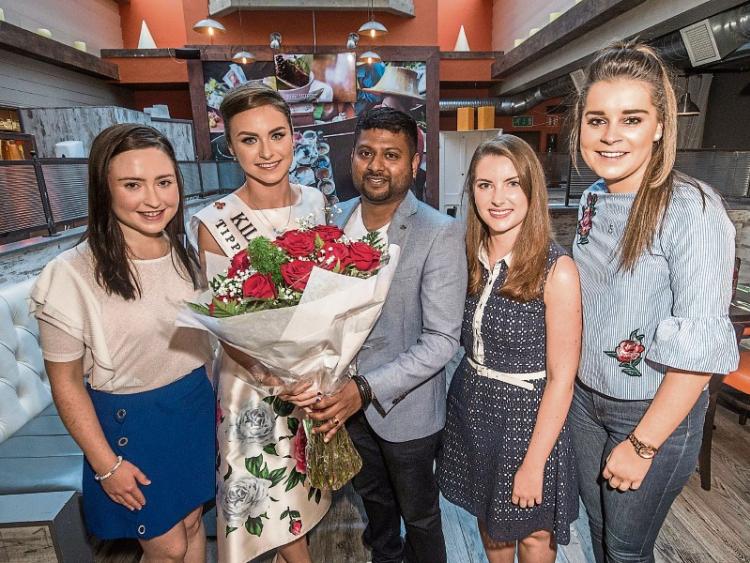 The Callan veterinary nurse has been a popular choice with the public and will undoubtedlly impress the festival judges.

Spurred on by her late grandfather's wish to see her become a Rose Tara decided to enter the competition this year.

“I did not think for a moment that I would be chosen as the Rose of Kilkenny. I have enjoyed every moment of it,” she said.

Tara has great support from her home town of Callan and indeed the entire county and friends and family have travelled to Tralee to support her. Her godparents from Greece have even flown in to cheer her on.

Last Thursday Aroí on Friary Street, who recently was named the Best Asian Street Food in Ireland hosted a tea party for Tara to wish her well in Tralee.

Rosebud Hallie (10) was excited about her role in the festival.

“I will be helping out the German Rose and I can't wait,” said the ten-year-old who is a pupil at St Canice's National School on the Granges Road. Her Mum Anthena Hogan told the Kilkenny People that all the family are very proud of Hallie.

Escorts Patrick O'Neill from Bennettsbridge and Cillian Phelan from Newpark Drive are also down in Tralee for the duration of the festival.

Manager of MacDonagh Junction Shopping Centre Marion Acreman said that the centre is delighted to be backing Tara.

“We are very happy to be Tara's main sponsor and wish her all the best.

“She is smart and intelligent and it has been an absolute pleasure getting to know Tara and she will represent Kilkenny very well in Tralee,” she said.

Callan-based vet, Eoin Wilson and his wife Anna were also full of praise for Tara.

“We wish her all the best. She is a genuine, caring and bubbly personality and all the staff at the surgery and customers will have their fingers crossed,” said Eoin.

Tara is a strong advocate for animal welfare and has a number of pets including three dogs, two horses and three cats.

“I love my job, I don't think you could do it unless you were totally devoted to it, it is a 24/7 committment,” she said.

The Rose of Tralee festival runs from August 16 to 22. 64 Roses are in Tralee and this number will be whittled down to 32 over the coming days with 16 Roses due to be eliminated tomorrow (Thursday) and the remaining 16 elimanated on Saturday.

The finals will be televised live on RTE One on August 21 and 22.