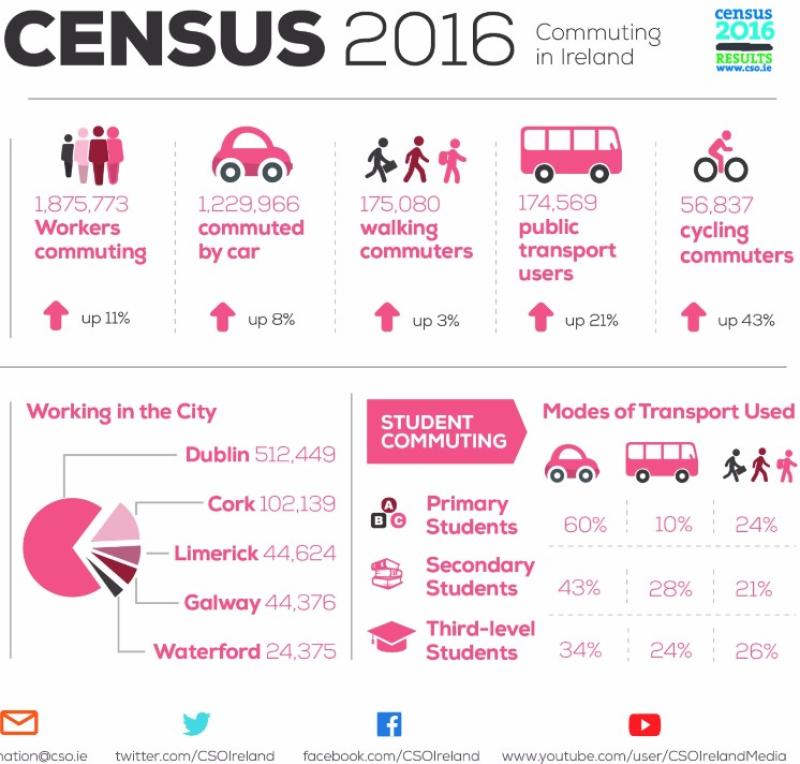 The majority of working commuters in Kilkenny travel by car with over 10,000 people leaving the county to travel to work every morning, according to the latest Census 2016 results.

The Central Statistics Office today published its Census 2016 report on Commuting in Ireland and the figures reveal that the commutes are getting longer for Kilkenny people.

Meanwhile there were six more secondary school children as of April 2016 in the county walking to school compared to five years ago.

Deirdre Cullen, Senior Statistician at the CSO, said: “This report presents detailed statistics on and analysis of the commuting patterns of workers and students in April 2016.

“It examines how we travel to work, school and college; the times we leave to get there and the length of time we spend commuting.

“It is particularly timely as we move into Autumn and the return of students to schools and colleges across the country.”

Travelling times rose in every county and the national average commuting time in April 2016 was 28.2 minutes, up from 26.6 minutes in 2011.

Commuters in Kilkenny have a travel time that is well above average at 25.6 minutes, compared to 23.9 minutes in 2011.

The report shows that there were 23,145 Kilkenny residents working in the county, while 6,786 people commuted into the county for work.

A further 10,092 people commuted to work outside the county, giving a net loss of 3,306 in the working population.