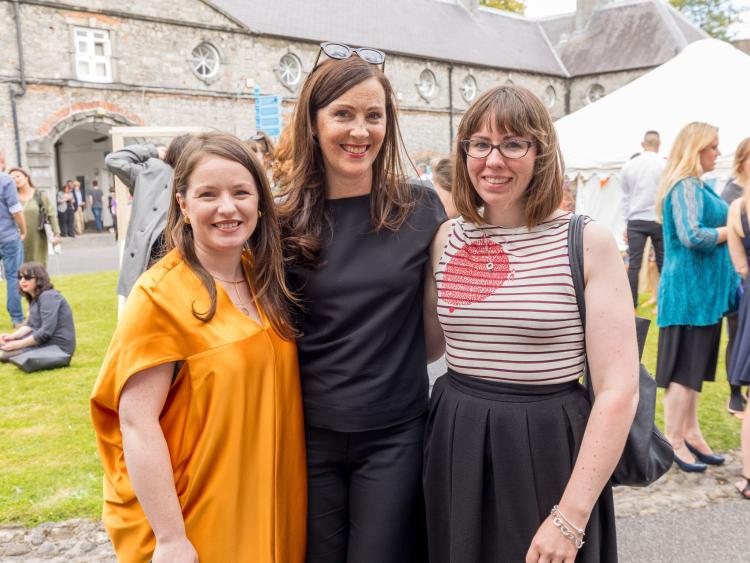 Caroline Ryan, Susan Brindley and Fiona Byrne of the DCCoI pictured at the opening of Hi! Fashion, a new exhibition at the National Design & Craft Gallery

Hi! Fashion, a stunning and must-see exhibition exploring and celebrating fashion design from Japan and Ireland, continues at the National Design & Craft Gallery in the Castle Yard, Kilkenny until novermber 12.

Anybody interested in fashion and good taste should visit the gallery soon!
Commissioned by the Design & Crafts Council of Ireland (DCCoI) and curated by Gemma A. Williams, it presents fashion and accessories that explore the visual correlations and contrasts between designers from the two islands.
As part of the 2017 programme celebrating the 60th anniversary of the establishment of diplomatic relations between Ireland and Japan, Hi! Fashion features fashion from both countries side by side, revealing unspoken dialogues and creating new conversations inspired by the contrasting, cyclical and disruptive nature of the design process.
The exhibition showcases garments from across six decades, starting with Irish designer Sybil Connolly who launched her couture line in 1957.
The work of other significant, internationally renowned Irish designers including: John Rocha, recognised as one of Ireland’s leading designers; Lainey Keogh who changed the face of Irish knitwear; rising international star Richard Malone; and Úna Burke whose designs have been worn by Rihanna, Lady Gaga, and Daphne Guinness.
Influential Japanese designers include: Kansai Yamamoto, designer of David Bowie’s costumes during the 1970s; milliner Maiko Takeda, favoured by the singer Björk; and visionaries such as Issey Miyake, together with innovative contemporary makers like Anrealage and Noritaka Tatehana.
Garments have been sourced globally from museum collections, designer archives and collectors as well as newly created pieces.
“Bringing these two islands together, this exhibition illustrates not only the global language of fashion but also reveals how it is underpinned by the fusion of concept and craft which is distilled by the intimate nature of individual approach and process. As a curator, I love the idea of experimenting with context and environment to create a new, abstract narrative from fashion’s forms,” Gemma A. Williams said.
In speaking about the exhibition, Karen Hennessy, Chief Executive of DCCoI, emphasised the organisation’s continual aim to exhibit the creativity, skill and innovation of designers and makers from Ireland through the National Design & Craft Gallery programme.
“Placing Irish work within an international context allows us to consider the similarities and differences of processes and materials between Ireland and other countries.
“We're delighted to have commissioned this exhibition to coincide with the 60th anniversary of the establishment of Irish and Japanese diplomatic relations to draw together the threads of the textile and cultural connections, providing different perspectives and sparking new conversations among visitors,” Ms Hennessy said.