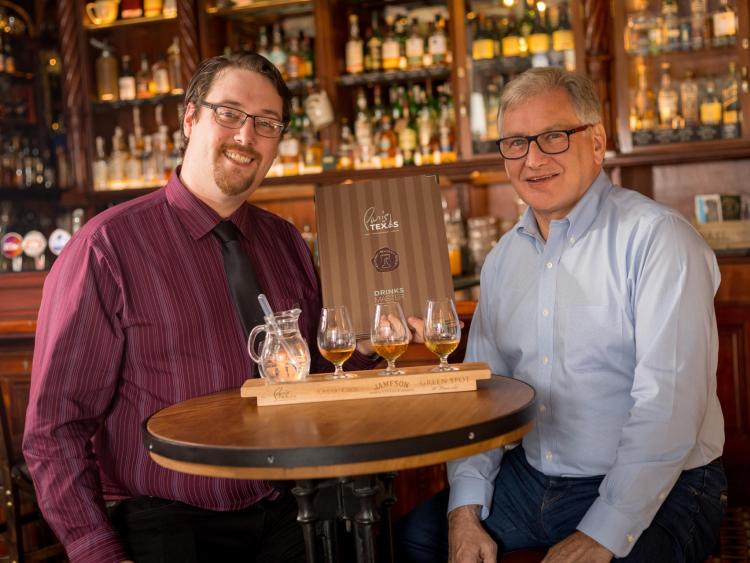 Kilkenny’s bid to become Ireland’s leading Whiskey Tourism destination steps up another gear on Thursday next, September 14, as Paris Texas welcomes whiskey connoisseurs and representatives from each of the other 9 Guild Houses to the newly-refurbished bar, smokehouse and live music venue for their monthly whiskey event.

Pat and Pamela Crotty and their growing team now stock almost 100 Irish, plus a selection of Scotch and American whiskeys, making Paris Texas one of the premier whiskey destinations outside of Dublin.
Guild members and whiskey connoisseurs who attend the event will also be able to sample the bar’s latest addition – the Midleton ‘Very Rare’ Vintages 2000 collection on the night. They’ll also be invited to peruse the new and exclusive Paris Texas Drinks Master Book which runs to 20 pages and describes in great detail the origin of and distilling process involved in each individual whiskey as well as its nose, taste and finish. Prices range from €4.50, right up to €45 per single measure.
The evening starts at 7pm when Bushmills Irish Whiskey Brand Ambassador, Seamus Lowry, will lead a sampling of some unique Irish Whiskey drinks, created especially for the occasion. Those attending will find out all about the amazing Bushmills Irish Whiskey story and have an opportunity to taste whiskeys that normally don't make it outside the distillery door. Tickets are on sale on Eventbrite now with early birds starting from €10.
Interest in Irish whiskey in particular has never been greater, Pat Crotty says. And a growing number are visiting Paris Texas specifically to sample the extensive selection. The first written account of distilling in Ireland comes from Kilkenny in the 14th century with the Red Book of Ossory so it is only fitting that the Crotty family, which has been involved in business in Kilkenny city for generations, would celebrate and honour this great tradition, he said.
It’s not just tourists who are broadening their horizons either – there’s phenomenal local interest too in appreciating whiskeys from around the world, Manager, Padraic Rafter, said. “We’re delighted to be bucking the trend, offering new experiences whether it’s with whiskey, gins, our cocktail menu or our food.
“We’re not just a bar that sells food. We’re a different type of bar that sells different food. We sell drink, but different drink. There isn’t a drinking culture in Paris Texas. We wanted to bring new ideas, new trends to Kilkenny. This is going to be a constant evolution and we’re not finished yet.”
The landmark Kilkenny city bar and restaurant is as popular among tourists and locals alike for its American-style and has pretty much doubled in size following a major transformation and an €800,000 plus investment. The three year renovation and extension works have seen the premises completely gutted and extended to the rear, where another bar and an enclosed courtyard has been added.
Pat and Pamela Crotty, their son, Kieran, and daughter, Rachel, all work full-time in the business. They’re very proud of the business and grateful to their growing clientele. A new kitchen and yet another bar are planned for an area to the rear which once housed an antiques shop on St Mary’s Lane, all in the shadow of the stunning new Medieval Mile Museum. A separate entrance is also planned, Pat Crotty revealed.
“We now have a core staff of about 40. When we complete the planned works, we will have a staff of 50 or more year-round. We closed for 11 months and business has grown steadily month on month since we reopened.

“We gutted the place right back to the four walls. We’ve completely reinvented it and have a brand new Paris Texas. We salvaged as much of the old timber as possible and we exposed the brick walls which were originally built by Woolworths. The spirits display section was the only part that was not touched in the process. We’re delighted with the finished product and we designed it this way so that everyone can find their own space here.
“Whereas the old Paris Texas was one big room, the new layout offers customers different, bite-sized experiences. Some people still like to come in and sit at the front bar. Others like to take their coffee into the courtyard out the back.

“The feedback has been very positive and business continues to grow. Our revenue has grown by as much as 30 per cent per annum over the past three years. As much as 60 per cent of that revenue comes from food. People come here for a dining experience and to enjoy different types of drinks.
“We’ve lots of different craft beers, whiskeys and 35 different gins. The ambiance is totally different. It is one of fun, of friendly banter, a place you can bring the family for food. We’re proud to be part of the new Whiskey Guild and hope to grow that. The future looks very bright and we’re very proud to be part of it all.” The Kilkenny Whiskey Guild includes Matt the Millers, Billy Byrnes,The Hibernian Bar , Lanigans, Brewery Corner, Langtons, The Left Bank, the Dylan Whisky Bar and The Wine Centre.