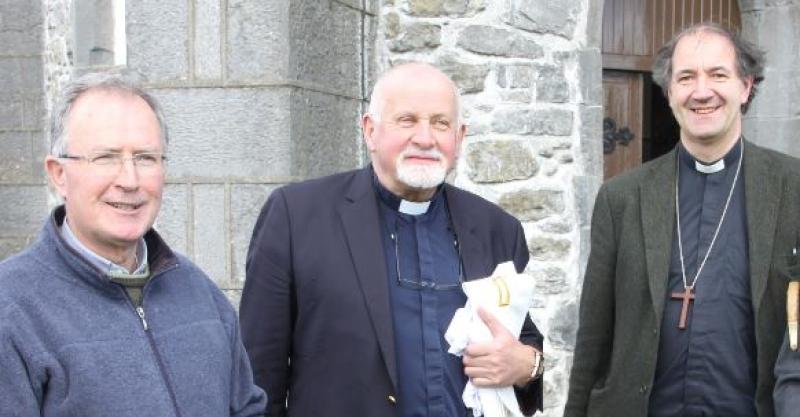 Fr Jim Murphy with Fr Jackie Robinson and Church of Ireland Bishop of Ossory, Michael Burrowes, ahead of the ‘Voices of Hope’ series of talks

A survivor of the Miami Showband Massacre, the Church of Ireland Bishop of Ossory and the chairwoman of the board of Governors of Kilkenny College are among the speakers at the annual Voices of Hope in St Canice’s Catholic Church during October.
This year Fr Jim Murphy and his team are focusing on young people and ‘Faith In Our Schools’.
Tonight (Wednesday) the series begins with Linda Rainsberry, who formerly practised as a solicitor and has since been fully engaged as a mother.
She is the chairperson of the Board of Governors of Kilkenny College.
Linda will set out the current pressures; societal and political that are threatening faith based education and will introduce the “Faith in our schools” group. The talk begins at 7.30pm and there is an open invitation to anybody to attend.
Linda will explore the task of responding to these pressures in terms of what faith based schools do, or at least should offer.

On Wednesday, October 11, Church of Ireland Bishop of Ossory, Cashel and Ferns , Michael Burrowes will talk about the value of faith based schools and the distinctive contribution and values of Church of Ireland schools.
The following Wednesday, Eithne Woulfe, a St Louis sister and a former school Principal who currently has responsibility for the education brief with the newly formed Association of Missionaries and Religious of Ireland, will deliver a talk. She has completed research of faith-based and equality issues as they pertain to education and schooling in Ireland and France. In the context of “seeds of hope” and Ireland being at a “frontier space” in terms of searches for meaning, values, individual freedom and belonging and what might a Catholic Education perspective offer in these contexts.
On Wednesday, October 25, Stephen Travers, a member of the Miami Showband and a survivor of the massacre 1975 will speak.
He is part of the ‘Faith and Reconciliation Platform’ established to give victims, regardless of political, religious or cultural background, an opportunity to speak for themselves; to tell their story so that the terrible consequences of political violence will never be forgotten and the mistakes of the past never repeated.