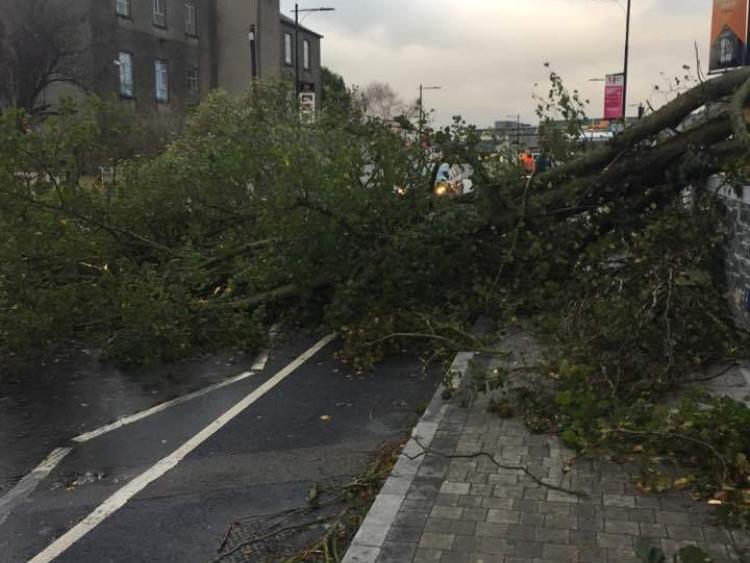 This tree beside the old swimming pool in Kilkenny city was knocked by Hurricane Ophelia yesterday. It stood next to the new bridge and blocked it completely. It was removed quickly and safely

As daylight broke, the full extent of the damage caused by Hurricane Ophelia in Kilkenny became evident after winds of up to 120 km per hour were recorded locally.

Debris is still strewn across all roads after dozens of fallen trees were removed from roadways. Many homes are still without power and householders are beginning to count the cost with knocked walls, missing slates and blocked entrances.

Many roads into the city were blocked at some stage yesterday with fallen trees preventing travel. Similar situations arose in Thomastown, Graignamanagh, Callan, Freshford Urlingford and Castlecomer areas.

Motorists are asked to excercise extreme caution as branches, weakened by the hurricane, may fall on to roadways.

Frustration too for retained part-time firefighters in Kilkenny. Around 60 of them were called into the seven stations in County Kilkenny on Monday morning at 830am to 'stand by' for Ophelia.

Because of the Status Red Warning they would not be allowed to respond to any emergency calls unless there was going to be 'life' risk.

The firefighters remained in the stations awaiting permission to move out and clear roads. The permission never came because Status Red Warning was still in place.