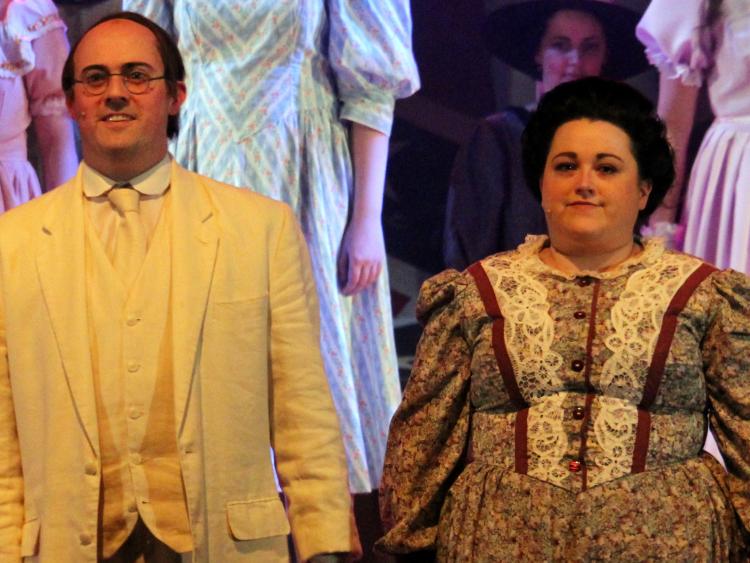 Kilkenny Musical Society favourites, Michael Hayes and Sarah Brennan will be performing with St Patrick's Band in Langton's for the 'movie night' on Wednesday, November 15

Fresh from their recent success at the national AIMS awards, Kilkenny Musical Society are gearing up for a night of fantastic entertainment at Langton’s Ballroom on Wednesday, November 15.
Celebrating the often memorable marriage of movies and music, this group of talented performers will showcase hits from iconic films such as ‘Singing in the Rain’, Casablanca, South Pacific, Moulin Rouge, James Bond, Sister Act and many more.
At the helm of this musical endeavour is Christine Scarry, the recipient of the illustrious Best Director trophy at the National AIMS Awards in Killarney earlier this year.
Under her musical direction, a cast of over 35 performers from the Musical Society will take to the stage, including some seasoned and award winning singers such as Michael Hayes, Sarah Brennan, Aidan Byrne, Kevina Hayes and Nicola Brennan as well as a host of new talent and faces.
Musical support on the night will be provided by special guests St Patrick’s Brass Band who will continue the “Movie” theme. They will also accompany the Musical Society members for some of the programme.
Kilkenny audiences are well accustomed to an epic night’s entertainment from this talented group of local performers, showcased most recently with their award winning production of Parade, which earned them 2nd place overall at the 2017 National AIMS Awards as well as their sold out cabaret at the Set Kilkenny last summer. “Let’s go the Movies” is shaping up to be yet another show stopping performance from this dynamic group.
All proceeds from the concert will go towards the staging of the society’s 2018 production: ‘Sister Act’ which will be staged in the Watergate in April. In addition, with a fantastic pre-show early bird menu available at the four star Langton House hotel, musical lovers can also enjoy an evening of food and wine. Tickets for what is sure to be a memorable night’s entertainment are just 12 euro and available online at www.kilkennymusicalsociey.com or from reception at Langton’s House Hotel.