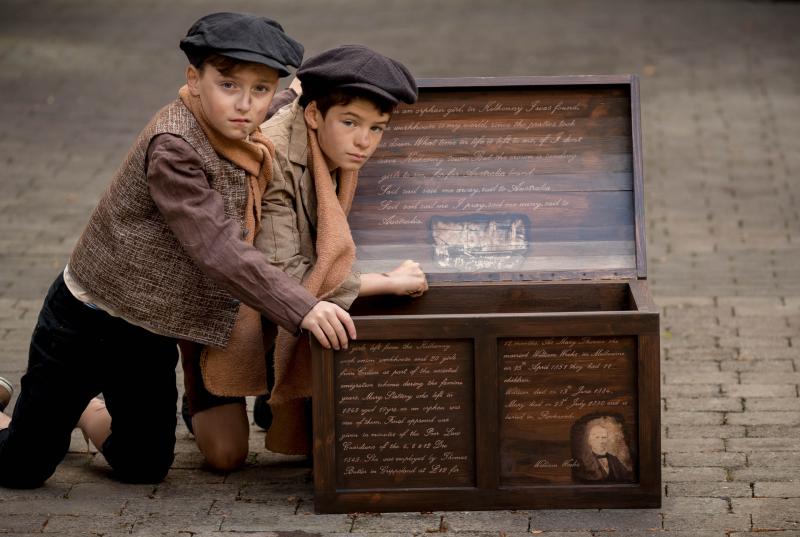 The descendant of a girl who emigrated from Kilkenny to Australia in 1849 was among the special guests at the opening of a new tour on the site of the former Kilkenny Union Workhouse yesterday.

Kerry Tupper is the great-great-granddaughter of Mary Slattery, who, along with her parents, went into the workhouse during the Great Famine in 1845. Her parents were dead by 1846, and when Mary was 17, she was sent to Australia with hundreds of other girls.

Ms Tupper, a teacher of history and archaeology, travelled from Australia to Ireland to be present and speak at the launch of the new audio-visual tour at Mac Donagh Junction. The project has been developed by centre manager Marion Acreman.

British Ambassador Robin Barnett and Australian Ambassador Richard Andrews were among the dignitaries, diaspora, historians, genealogists and local community who came to honour the memory of Kilkenny’s 970 Famine victims. MC for the afternoon was Sue Nunn, and local schoolchildren entertained with choral music and theatrical performances.

Using accounts recorded in local newspapers articles, minute books from the Board of Guardians and osteo-archaeological analysis of the victims, the Kilkenny Famine Experience offers new insights into the lives of Irish people in the 1840s, one of Ireland’s bleakest periods.

Governor Liam Dowling and Assistant Chief Officer Mark O Brien of Arbour Hill Prison presented a commemorative Famine Orphan Travel Box on the day which was specially hand crafted by prisoners for the Kilkenny Famine Experience; the travel boxes are a dual project between the Irish Prison Service and Michael Blanch of the CCIFV.

Senior choirs from local schools, Loreto, CBS and St Kieran’s College prepared pieces of choral music linked to the famine experience and along with this, local boys Cathal Acreman and Ferdia Shaw enacted a short drama piece depicting the story of two young brothers, John and Patrick Saul. They presented at the doors of the Workhouse in 1842 after being abandoned by their parents on the Dublin docks and were on foot travelling back home to Clonmel.

“This event is the culmination of four years of work to bring our Kilkenny Famine Victims back into living memory," said Ms Acreman.

"The community reconnection project was described by many as generational healing and evoked tremendous consideration and reflection for the participants. The free tour is already in great demand and we look forward to welcoming groups and individuals to visit and learn the stories of the Kilkenny Union Workhouse."

The opening concluded at the final resting place of the Kilkenny famine victims in the Memorial Garden Crypt at MacDonagh Junction. The crypt, enhanced with a special sculpture, crafted by Ani Mollereau depicts the story of the Saul brothers. It also features the fingerprints, which are etched in brass plating, of almost 1000 historians, researchers, genealogists, people connected to the Workhouse, the local Kilkenny community and the diaspora. A specially designed display unit for the Travel Box was supported by CDS Architectural Metalwork and Circle Laser, two local firms who were involved in the project.

The free audio-visual tour, set on the site of the former Kilkenny Union Workhouse, is now open to the public. Marking the memory of Kilkenny’s 975 famine victims, visitors will be offered new insights into the lives of Irish people in the 1840’s. www.kilkennyfamineexperience.com.