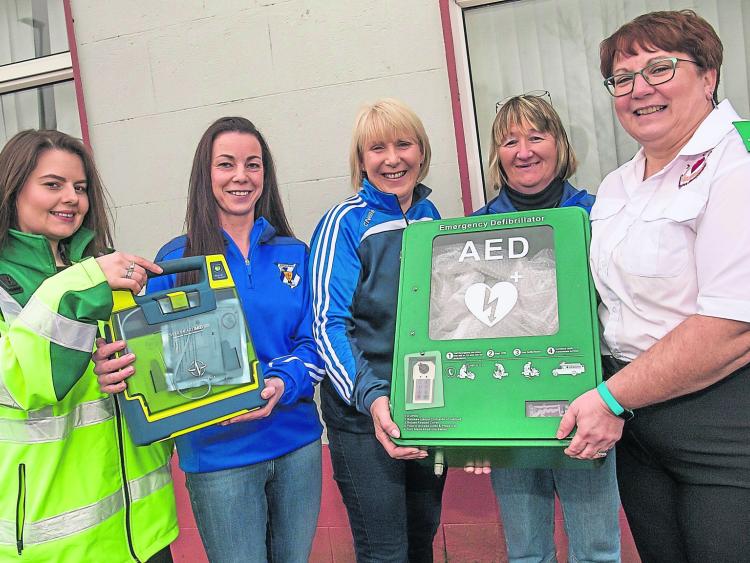 Volunteers in North Kilkenny are doing trojan work to make sure their community has access to life-saving emergency defibrillation treatment, writes Mary Cody.

The communities in Galmoy and Johnstown have defibrillators and are trained in using them but in recent weeks these life-saving machines have found a new home in key locations in both parishes.
Cathy Dermody is one of the driving forces behind the Johnstown, Crosspatrick and Galmoy First Responders Team. She is trained in first aid and was instrumental in securing two new containers to house two defibrillators - one at the Fenians GAA club in Johnstown and the other one in Galmoy GAA Club.
“When someone suffers a cardiac arrest every second is crucial in whether they make a recovery or not,” she said. “For every minute that passes the chance of survival drops by ten percent. It is vitally important not only to have defibrillators but also that people have easy access to them and know where they are located. Minutes save lives in these situations.”
The Johnstown, Crosspatrick and Galmoy Community First Responders Team recently celebrated their first anniversary. At present there are seven First Responders in the group, with three more in training. The group has responded to three callouts, which have all ended positively.
To mark the group’s first anniversary the group has purchased two outdoor cabinets so that defibrillators can be moved to a publicly accessible locations.
“We go out and attend calls for the National Ambulance Service,” she continued. “When they receive an emergency call they contact us and we go there while the person is waiting for paramedics. If someone needs life-saving assistance then we are able to help and the group is all trained in First Aid.”
Cathy Dermody, along with First Responder, Phil Browne are also involved in training from primary schools up to adult level.
The group is also sponsoring an art competition for the national school students in Johnstown, Crosspatrick and Galmoy along with a second competition for students at Colaiste Mhuire.
Judging will take place on February 11 with judges including Cllr Mary Hilda Cavanagh, John Fitzgerald of CFR Ireland and Norma O'Donnell of the National Ambulance Service at the St Kieran’s Community Hall in Johnstown.
All are welcome to attend an exhibition of all entries during those two hours, when anniversary cake and refreshments will be served. It is hoped that the event will raise awareness of the group’s work.