Graignamanagh meeting says no to Barrow Greenway on Kilkenny border

Closing date for objections to Carlow County Council is February 6 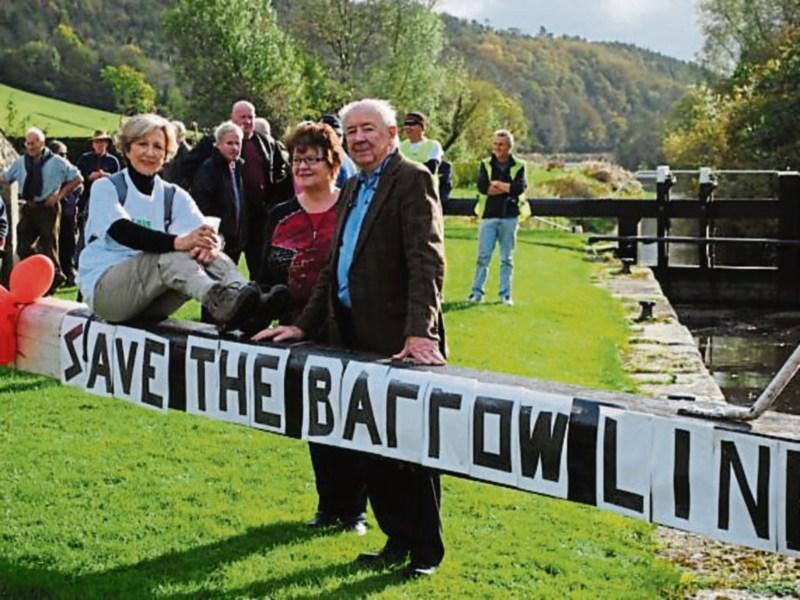 Another emphatic ‘no’ to Irish Waterways proposal for a hard surface Blueway along the Barrow River emerged from a lively public meeting held by the Save the Barrow Line group in Graignamanagh on Sunday.

The 300 people who filled the Abbey Hall  voted by a unanimous show of hands to continue their opposition to the plan. Last spring, after receipt of a record number of submissions, more than 440 of which only 3% were in favour,Carlow County Council postponed a decision on Waterways planning application to dig up the grassy towpath and lay a hard unbound track.

Waterways were given nine months to answer some of the objections raised and came back with Further Information before Christmas. This has opened up the plan for public submissions again, and almost 100 more objections were posted at the meeting to be hand delivered to Carlow County Council this week before the February 6 deadline.

Save the Barrow Chairperson, Olivia O’Leary told the meeting none of the major objections, in her opinion, to the plan had been answered in the new information.

She said the plan would in the eyes of Save The Barrow, degrade the green unspoilt landscape that attracts tourists to Ireland.  Tourist surveys showed that walking was the most popular of all activity holidays visitors took here and the hard surface was less comfortable for walkers and would encourage cyclists to go at a speed which intimidated walkers and other users.  An Taisce, the body charged with protecting Ireland’s built and natural environment, had claimed in its original submission that the grassy surface as it is allows for a speed which accommodates all users.

An Taisce, she pointed out, had also questioned whether the proposed 2.5 metre width was too narrow for a shared use two-way cycle path and whether there was potential for conflict between users.  The proposed 2.5 metre Blueway, she claimed, is less than the minimum width of 3 metres prescribed by the Transport Infrastructure Ireland’s Rural Cycle Scheme design for such paths and Waterways have admitted they will not even be able to reach the 2.5 metre width on some of the towpath.

The meeting was told by O’Leary and by Art Mooney and Ros Murray from the Carlow Barrow Users Group that Waterways had not answered the criticism that the proposed unbound surface of hardcore and crushed limestone would become potholed and damaged by the regular flooding of the river and would be time consuming and expensive to maintain. Waterways Ireland answer was that for most of the river’s length, flooding would only leave deposits  on the track, but not erode it.  ‘Waterways have discovered   a new type of flood’ said O’Leary’ which lifts things from the water to the land but which moves nothing from the land to the water!’ The meeting was show videos of the proposed surface recently laid by Waterways which has been seriously damaged by floods.

Art Mooney said:’ Waterways admit that 60% of the towpath floods. So 60% of the track will be potholed.  They say it will take 10 years for the wildlife and its habitats to recover from this development but they also say this surface only has a life of ten to twelve years.  So there will be constant disturbance from maintaining it.’

Ros Murray from the Carlow Barrow Users group said it was important that local people spoke out and made clear their opposition to this plan. ‘You each have a personal relationship with the river. Don’t be afraid to put your head above the parapet.  Protect this natural place for the next generation’

The Barrow has been designated a candidate special area ofconservation by the EU and  with protected species like otters and kingfishers. The meeting was told that locals who had objected to the Blueway had been able to provide to the planning authorities evidence of otters and kingfishers along the towpath but that Waterways continued to state that the towpath wasn’t a habitat for either.  Questions were raised as to whether Waterways had conducted their surveys in the right season and, in the light of that, Waterways promise to do a pre-construction otter survey did not inspire confidence.

O’Leary pointed out that An Taisce had already raised major concerns about the effect of the development on one of Ireland’s most important ecological corridors. An Taisce said ‘The physical footprint of the proposed infrastructure will result in the loss of habitat along the length of the proposed development.  The remaining habitat along the length of the road will be fragmented.’

An Taisce added: ’it is of concern to An Taisce  that the habitat loss and disturbance associated with this development will negatively impact upon otter and bat populations within the site.’  An Taisce also raised concerns about the loss of habitat for the kingfishers.  It pointed out that the Barrow acts as an important reservoir for wildlife and biodiversity throughout the region.

O’Leary claims that most of these issues raised by An Taisce have not been answered in the Further Information provided by Waterways Ireland. Closing date for objections to Carlow County Council is February 6.  The council will announce its decision on February 21.

The closing date for objections to Laois County Council is February 5, and for Kildare it is January 31.