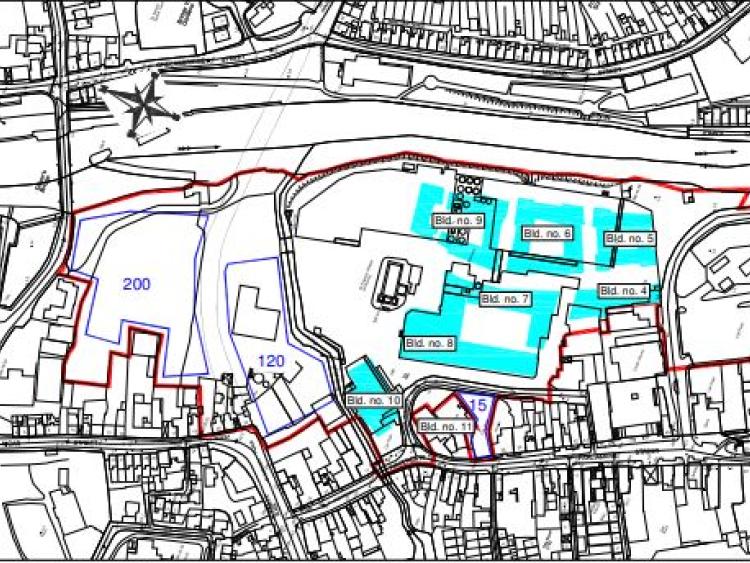 Potential locations of temporary surface carparks identified in the Roadplan Consulting report by the number of spaces: 200 and 120 at the north end of the site. (Roadplan Parking Options Assessment)

A public consultation period is under way for a variation to the Kilkenny City and Environs Development Plan to allow for temporary car parking to be put in place on the former brewery site, the Abbey Quarter.

Submissions and observations must be received by Kilkenny County Council by 5pm on March 2.

While no exact locations have yet been decided, a parking options assessment conducted at the request of the council identified two areas at the northern end of the abbey site, either side of the new bridge, as potential options. One of these is at the north end of the site between St Francis Bridge and the River Breagagh (120 spaces), while the other is the area between the bridge and Green Street (200 spaces).

The parking options assessment, which was carried out by Roadplan Consulting, identifies a need for more than 1,000 extra spaces in the city over the coming years. In the meantime, it says the emerging car parking needs of the developing Abbey Quarter should be served by the site’s currently undeveloped plots.

“It is clear from the parking surveys that the provision of temporary parking within the Abbey Quarter site on undeveloped plots — on the lands between St Francis Bridge and Green Street and on the lands containing plots 12 and 13 — would be viable because there is a demand for parking at those locations,” notes the report.

“That section of the Abbey Quarter area is adjacent to the highest existing demand for parking in the city.”

It also says that infrastructure is in place, while costs would be lessened by the existing surfaces.

“Access could be provided from St Francis Bridge and the site has existing surfacing that would provide a base for parking with little additional investment required. This would provide an immediate revenue stream to fund future parking,” says the report.

A copy of the Proposed Variation along with various assessments and reports, may be inspected until March 2 at County Hall on John Street or the Carnegie Library on John’s Quay.

Submissions should be marked ‘Variation No 5’, and can be made online here, emailed to ourplan@kilkennycoco.ie or sent in writing to Director of Services Planning, Kilkenny County Council, John Street, Kilkenny.