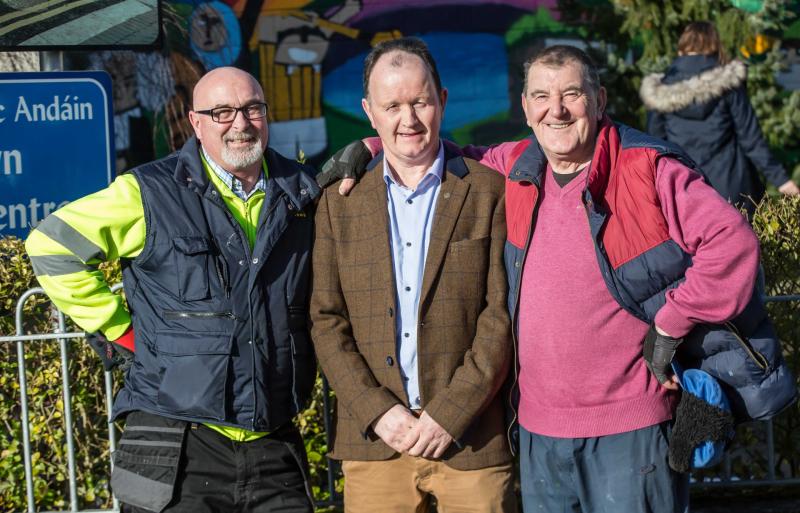 Laughter greets you when you enter the Concert Hall on Marsh’s Street in Thomastown.

The senior citizens are in joyous form setting up their stalls for their sale of work which is held every Thursday and Friday in the hall.
Through the partition and into the main concourse, fun is in the air as the volunteers in the community fully-fitted kitchen, get ready for the lunch time heave while in the concourse itself, with memory laden old photos on the wall, members of Camphill Community are busy doing bonding classes as part of an in-house training day.
Below it is the entrance to the former sports hall where an actual shed has been built in one corner to accommodate the Men’s Shed group who are all in good spirits.
This is just a flavour of the huge level of activity in this oxygen filled, oasis of busyness on a daily basis.
Funeral parties are catered for by the family and friends of the mourners as are christenings and it even opened on Christmas Day to provide dinner for those that needed it.
Every conceivable past-time is catered for from Pilate’s to circuit training to community meetings, the list is almost endless.
As I walk in to the Concert Hall on Thursday morning, I receive a firm handshake and smile from Seamus Quigley who points out that the entire complex is busy from the time it opens at 8.30am in the morning until it closes at 11pm at night.
He is a man on a mission, a patriarchal, much loved volunteer who has been chairman of the limited company that runs the place since 2009 and one of the main drivers of the improvements, renovations and innovations there.
Concert Hall
As we stand in the balcony of the Concert Hall and look down, he explains that the 40 extra seats being installed there will bring the seating capacity in 200 to what was a derelict, empty shell without a roof when the community got hold of it just over 12 years ago.
The Thomastown Concert Hall, concourse and sports hall (community space) has been transformed into a thriving community driven activity centre.
By the time the new seats are installed in the concert hall, there will have been €0.5 million spent on the place. And here’s the really amazing thing, there is no debt. How many clubs and voluntary organisations can say that after undertaking such massive undertakings?
There is still much to be done, Seamus explains as we stand in the centre of the former sports.
Roof replacement
The roof has to be replaced but they already have half the money for it, €50,000. They are looking for the other half and knowing the voluntary committee, they will find it. The former sports hall which is leaking will then be transformed into a modern space with a mezzanine where many extra activities will be accommodated as more and more people and groups come to recognise the magic of the Concert Hall.
Seamus Quigley himself reflects the story of the place. He suffered a very serious work injury, a number of years ago which still requires him to have his dressing changed twice a week by the public nurse. He battles through the pain every day. Likewise the Concert Hall, was down but is back on its feet, thriving and leading the rejuvenation of the centre of Thomastown again, reflective, this time of the strength of the people in the community and their drive to make the Concert Hall, a place that Thomastown residents can be proud of and which can be used as a template by the Kilkenny LEADER Partnership and Kilkenny County Council to be the catalysts for change on other parts of the city and county.
To underpin its importance and its pre-occupation with doing good, it opened on Christmas day and was inundated with volunteers.
Gardai use it for community events like Text Alert set up, the ETB run computer courses there.
The Concert Hall Community Centre is a limited company by guarantee. The voluntary board of directors are Ailish Hayes, Dorothea O’Hara, Tom Dack, Paudie O’Neill, Seamus O’Brien, P.J. Whelan and Seamus Quigley.
The centre is run by a management committee made up of chairperson and manager Seamus Quigley. Ailish Hayes, financial controller with Daffodil Care Service, treasurer is Carol Whelan, who runs the butcher shop in the town and Mary Wallace as assistant secretary.
Among the groups the centre supports are Kilkenny Women’s Refuge and The Watergarden Dance Group on Wednesdays, as well as coffee mornings in aid of good causes, not to mention the Active Retirement Group, Thomastown men’s shed, Friends of St Columba’s, the Irish Wheelchair Association and the ICA.
Others who help out are John Blanchfield, Mary Wallace, Chris Quinn, Mary Butler, Maura Minogue, Sue Dillon and Marie Dempsey. They form a strong band of brothers and sisters, the kettle crew who are called upon when events are on like funerals and drama nights.