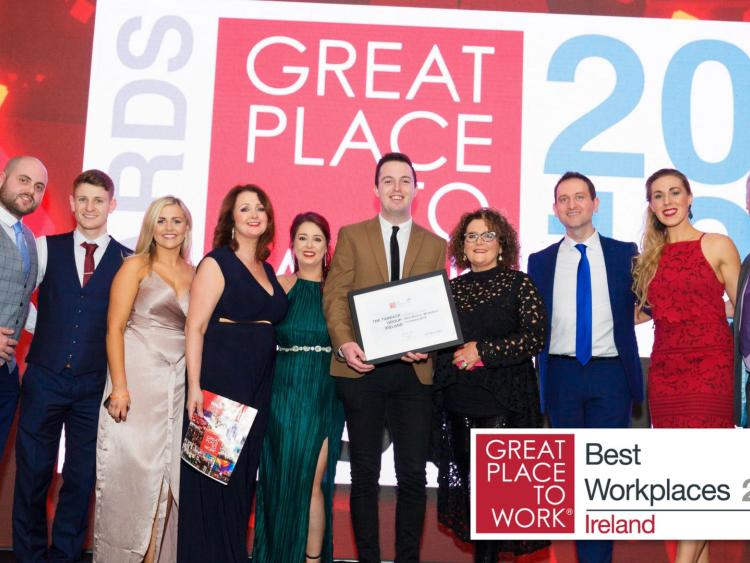 The Taxback Group at the awards

The Taxback Group has just been announced as one of the top places to work in Ireland -  once again increasing its mark year on year  and finishing in the top five.

The Kilkenny-based company were recognised at the annual Great Place to Work Best Workplaces in Ireland awards in the Clayton Hotel on Burlington Road, Dublin.

This is their third consecutive year as the only company in the South-East to be named as a top Irish workplace, based on the findings of a robust employee survey and a thorough assessment of their policies and practices by the Great Place to Work Institute.

“This 3-in-a-row accreditation for us, and consistent increase up the rankings is down to the dedication and hard work of many people across our organisation”, says Terry Clune (CEO & Founder of The Taxback Group).

“At a time of great business growth, and continued success in the marketplace, this achievement is a testament to the great people behind our great products and services.

As our business grows, not only in the South-East of Ireland, but globally also, it’s a hugely exciting time for us. I must give special thanks to all of our staff, as none of it would be possible without them.”

In 2018, Great Place to Work® Ireland enters its sixteenth year of recognising great workplaces with the publication of their Best Workplaces in Ireland lists, and the number of workplaces who are realising the benefits of empowering their employees to flourish in a supportive high-trust culture continues to increase.

“It’s been a mixed year for Irish workplaces”, said John Ryan, CEO of Great Place to Work® Ireland. “who have seen good trading growth is tempered by ongoing uncertainty over the impact Brexit will have. The organisations on this year’s list know that beyond a certain point, employees aren’t going to be tempted by a slightly more generous financial package: they want an environment where they feel psychologically safe, encouraged to grow, provided with opportunities to develop, and empowered to do their best work.”