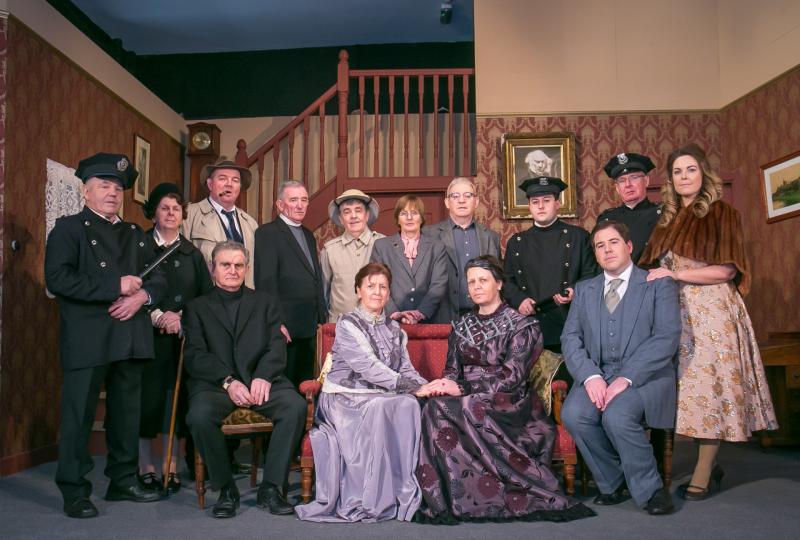 All roads lead to Graignamangh (via Brooklyn, New York) on Thursday, Friday and Saturday for the Duiske Players wonderful production of “Arsenic & Old Lace”. This production is being directed by group stalwart Helen Kavanagh who is putting the cast through their final rehearsals at the minute.

The play is a farcical black comedy revolving around the “seemingly well-to-do” Brewster family, who were descended from the Mayflower, but now composed of a host of other attributes!

The leading ladies - two spinster sisters Abby & Martha Brewster ( Edel Bolger & Stas Bolger) have developed very bad habits with their homemade elderberry wine, which some could only describe as lethal.

Their nephew Teddy Brewster (Paul Hickey), who believes he is Theodore Roosevelt, also lives with the sisters and assists them in their daily duties and is on hand to help when his brother Johnathan (Peter Prendergast) and his alcoholic accomplice, Dr. Einstein (Pat Kavanagh) come to visit.

Mortimer Brewster (Edward Hayden), is a dramatic critic who must deal not only with his crazy family but also the regular visits from the local police officers (John Meaney, Jim Whelan, Jim Kielthy, Nathan Dunne) in Brooklyn, New York,  and also continue to make plans to marry the woman he loves, Elaine Harper (Brid Maloney), much to the disgust of her father Rev Harper (Tommy Prendergast). With all this action unfolding the chaos is accelerated by the respective arrivals of Miss Witherspoon (Lily Brennan) and Miss Gibbs (Anna Malone).

A wonderful authentic Victorian Set has been designed by Helen Kavanagh and Eamonn Doherty, Lighting is by Feekie O’Brien, Sound is by Mark Bolger, Make Up is by Deborah Murray with Bonnie Prendergast, Maura Gahan, Marian Kielthy and Liz Whelan leading the front of house team.

Admission is €10 and doors open at 7pm. Large crowds are expected for these shows and seating will be allocated on a first come, first served basis.