Tradfest Kilkenny will brighten St Patrick's weekend in the city 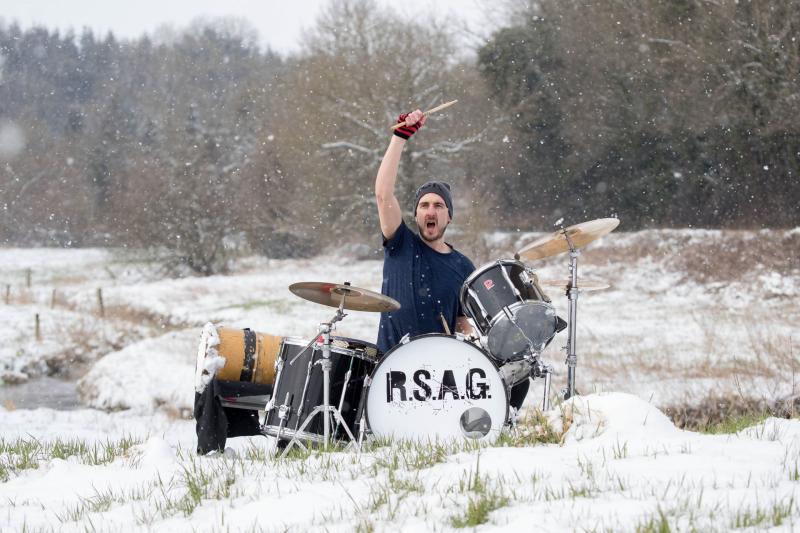 Jeremy Hickey in the snow. Jeremy is running a series of drumming workshops for both adults and children during St. Patrick’s weekend as part of Tradfest

The four-day feast of traditional music in Kilkenny to coincide with the St Patrick's weekend kicks off on Thursday, March 15 with a very special event in Ryan’s Bar to honour Kilkenny’s music ‘ground-breaker’, the late Willie Meighan.
Willie was, fittingly, honoured by IMRO at their recent annual awards ceremony.
Masterclasses
With a very impressive line-up of gigs, masterclasses, workshops and trad discos, Kilkenny TradFest, only six years in existence, is without doubt growing organically and is catering for all tastes, ages and pockets.
Thanks to Bulmers generous sponsorship of the festival, there are a host of fabulous free gigs in the city bars – 60 in total.
Highlights include great Irish groups like The Bonny Men and Notify performing in Paris Texas. No charge but ‘punters’ are advised to come early.
Kilkenny’s medieval architecture offers some of the most unique concert venues in Ireland. Finbar Furey will play in the stunning St. Canice’s Cathedral while Mairtín O’Connor, Zoe Conway and Donal Lunny are holding masterclasses in Kilkenny Castle.
St. John’s Priory will be an intimate venue for Donegal’s wonderful Henry Girls who play two gigs over the weekend.
The Watergate, will host Brian Kennedy, while the beautifully preserved 13th Century tavern Kyteler’s Inn will be hopping to the sounds of Caladh Nua and Scullion.
Both gigs are followed by a mid-night Trad disco – so revelers need to get their dancing shoes on!
The Design and Crafts Council of Ireland are co-hosting a lovely event with uilleann piper and maker Mickey Dunne and the Kilkenny Pipers Club.
This free event is all about how uilleann pipes are made and played.
Keeping it local and youthful, Kilkenny’s multi-instrumentalist, Jeremy Hickey will be hosting drumming and percussion workshops​ offering an enjoyable way to learn new skills and make some noise and this compliments the broad array of new young trad bands coming to the festival for the first time. Kilkenny TradFest have some of the most interesting new young trad acts in the country such as Jiggy, Moxie, Ye Vagabonds and The Remedy Club.
Brian Kennedy is an internationally celebrated, singer, songwriter and former lead performer with Van Morrison’s Blues & Soul Revue for six years.
He will play The Watergate Theatre on Sunday, March 18.
Brian was the featured lead performer in Riverdance on Broadway for nine months in an especially tailored role at the request of the composer Bill Whelan,
His stream of chart-making albums.
‘A Better Man’ (1996) and ‘Now That I Know What I Want’ (1999), both went platinum at No.1 and earned him the awards of Irish Best Male Artist.