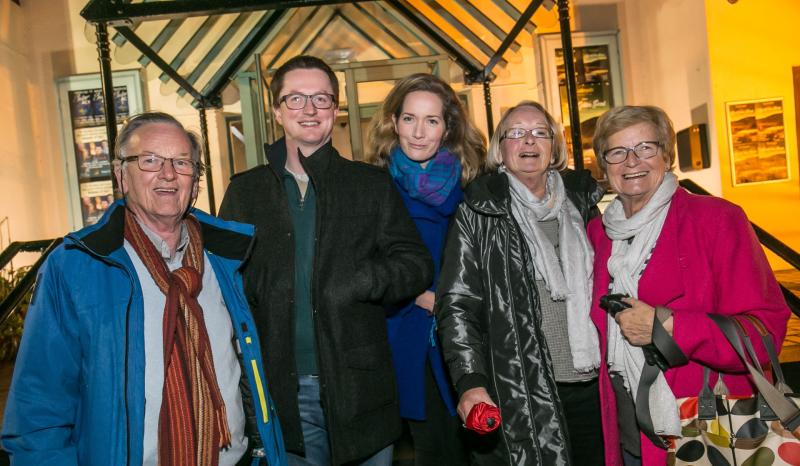 On Golden Pond at the Watergate Theatre, Kilkenny was excellent over the weekend and the good news is that it is on Thursday, Friday and Saturday. Don't miss the  opportunity to see this touching drama for all ages at our municipal theatre
Mary Cradock and Brendan Corcoran, in the lead roles, carried off  their roles with panache and aplomb.
Brendan has appeared in over 30 in-house productions including The Beauty Queen of Leenane, Sive and Arsenic and Old Lace.
How lovely to see Mary Cradock, who has given so much as director , writer and supporter return to the stage, in what many would say, is her rightful patch.
Although she has not appeared in an acting role for a number of years, Mary has been busy behind the scenes directing the recent Kings of the Kilburn High Road , and writing and directing a children's Christmas show for the last five years.
Alan Butler, who last appeared with Watergate Productions as William Dee in The Field turned in another strong performance. A regular performer in Kilkenny, Alan has appeared with such groups as Devious Theatre, Barn Owl Players and Kats Theatre.

For those of you who follow hurling, Dick O' Hara of Thomastown was an outstanding hurler, showing passion and commitment as he guarded the Kilkenny full-back line in the 1970s and '80s.  His daughter Elaine brings a similar passion to the stage, swapping the toughness and bravery displayed by her dad, with class and charisma.
In 2016 Elaine portrayed Maireád McHenry in the Civic Theatre Dublin in a new Irish Musical 'Find your way Home '.
This was followed by three performances in the USA in 2017 when she toured to Boston, Albany and New York.

It is difficult to  believe that Declan Taylor is on his 22nd cap with Watergate Productions and again he was excellent.And keeping to the tradition of  The Watergate introducing new cast members for each show, it was lovely to see Oisín O'Reilly make his debut.

Well done to Don O'Connor on yet another strong production. As with Steel Magnolias, which he directed  last year, this production is a credit to him and his ambition and ability to choose away from the safety net. That's his style, and it has benefited the Watergate  company profile beyond words.
Don has an incredible CV of shows which he has both written an directed. These include pantomimes, musicals and drama.

Finally, yet another stunning set design by John O' Donohue complimented by a light design from Gerry Taylor. John has been a regular designer with the in house company in recent years. Costumes by Clare Gibbs and props by Sheelagh Lynch.  Stage crew : Maeve O'Connor, Siobhán Cody, Rachel Madden.