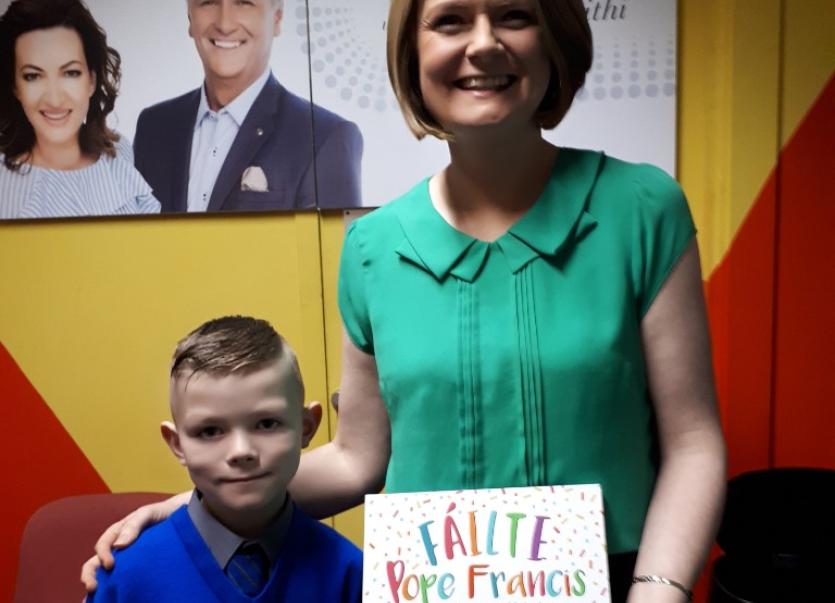 Brandon with Mags Gargan on the Today Show set

A Kilkenny boy has seen his letter among the few chosen from thousands to be part of a book welcoming His Holiness Pope Francis to Ireland when he visits in August.

The concept of the book began when ‘The Irish Catholic’ launched a Fáilte Pope Francis competition to celebrate the 9th World Meeting of Families, and the Pope’s visit. The competition saw children from all over Ireland, aged six to nine, draw a picture and write a letter of welcome to him.

Because there were so many letters sent in, Columba Press decided to pick their favourite ones and put them in a book.

Brandon Carroll, who is in second class at St Leonard’s National School in Dunnamaggin, was one of those whose letter was picked. He is the only child from Kilkenny to feature in the book. His letter asks for everyone to pray together for peace in the world, and he compliments the Pope on his 'Pope Mobile'.

Brandon is eight years old, and is making his Holy Communion later this month. His proud parents Gerry and Michelle Carroll, and brothers Dylan and Joshua, were delighted his letter was chosen.

Brandon, along with three other children, was also recently invited to the Today Show with Daithi and Maura, along with Mags Gargan from Columba Press, to discuss the book.