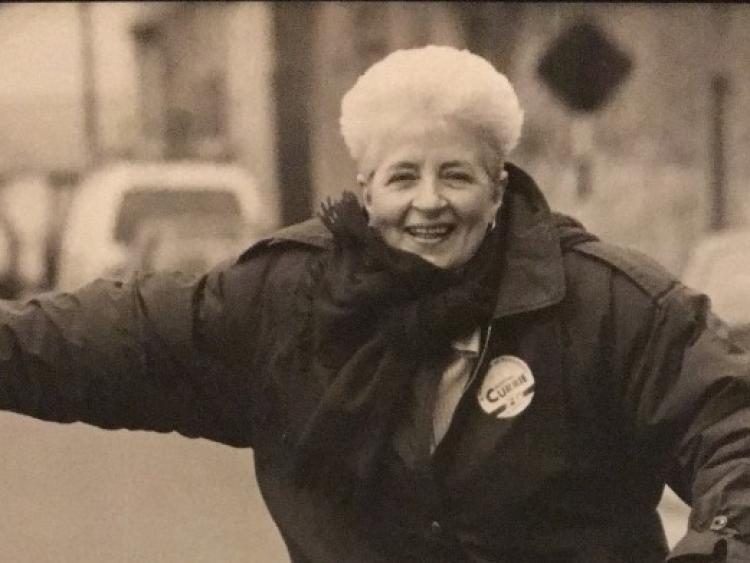 Carmel Boyd, Kilkenny photographed in 1990 by Michael Brophy on her way to the Irish presidency election count of that year

A marvellous woman who helped set up the Good Shepherd Hostel for homeless men in Kilkenny has passed away.
Mrs Carmel Boyd, Castle Gardens, Kilkenny died suddenly at her home on Tuesday of last week.
The 88-year-old was a former president of the Kilkenny Archaeological Society and involved in setting up Kilkenny Social Services in the 1960s.
She was a Fine Gael member of Kilkenny Corporation and deputy mayor of the city.
She famously confronted city officials one time during her tenure as a councillor by placing bottles of brown water from the public supply in front of them during a heated meeting in City Hall.
She was a feisty campaigner for what she believed in and was regarded as an effective, engaging local politician who put people before political affiliations.
She had a wonderful, sense of humour and always had an open door for all at her home where her dinners were legendary.
She was one of 18 children and was born into the Bowe family in Waterford city.
She passed away at her home with her sons Andy and John with her.
She was predeceased by her late husband, Dr Paddy Boyd 16 years ago.
Vitality and Fun
At her funeral Mass, her son Andy spoke lovingly about his mother: “Mam was the very essence of a loving mother - full of vitality, fun and affection.
“She was my father’s loving and supportive wife and life partner until his death 16 years ago and she juggled the roles of wife mother and receptionist exceptionally well.
“I was especially proud of her on sports day in Nowlan Park when she won the mother’s race barefoot,” he said.
Carmel is survived by sons Andy, Nicky, Patrick, John and Michael; grandchildren John, Sarah, Patrick, Sean, Robert, Isabella, Andy, Lily, Lucy, Katie and Tara, her brothers Hilary, Raymond, Frank and Carlan sister Vera, daughters-in-law, family and friends.