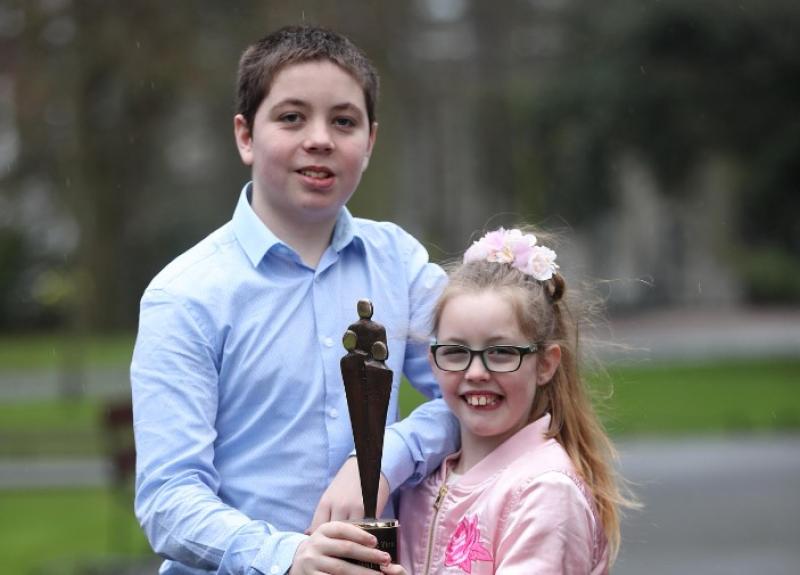 Local siblings Harry (13) and Molly Flynn (10) have been honoured with a top accolade at the 43rd People of the Year Awards, organised by Rehab, for saving their sister’s life on many occasions.

The young “superheroes”, from Ferrybank in South Kilkenny, were presented with the Young Person of the Year Award by An Taoiseach Leo Varadkar for their extreme bravery and courage.

The awards were broadcast live on RTÉ One from Dublin’s Mansion House earlier this evening.

Ireland’s longest-running and most prestigious awards event, the People of the Year Awards are widely recognised as one of Ireland’s highest accolades. Nominated by members of the public, and finalised by a panel of adjudicators, a total of ten awards were presented at the ceremony which was hosted by Gráinne Seoige and Aidan Power.

Harry and Molly’s sister, Isabelle (6), was born with cerebral palsy and apnoea which means she can suddenly stop breathing at any stage during the day or night. Isabelle’s condition worsens when she is sick or has a cold, which means it could happen 20 times a day.

Both Harry and Molly have been junior members of the ‘T Bears’ of the Irish Red Cross  since they were five-years-old. The skills they have developed means that they have been life-savers to Isabelle on hundreds of occasions during her short life so far, including giving CPR while playing on a bouncy castle and even in a supermarket trolley while out grocery shopping.

Mo Flynn, Rehab Group Chief Executive, organisers of the Awards, said: “We have services throughout Ireland that support thousands of people with disabilities. Every day our teams in communities across the country meet people who are also doing great work, but they do not seek the limelight or get the recognition they deserve. The Awards serve to highlight all that is good about Ireland and honours those whose courage, resolve and bravery is boundless.”