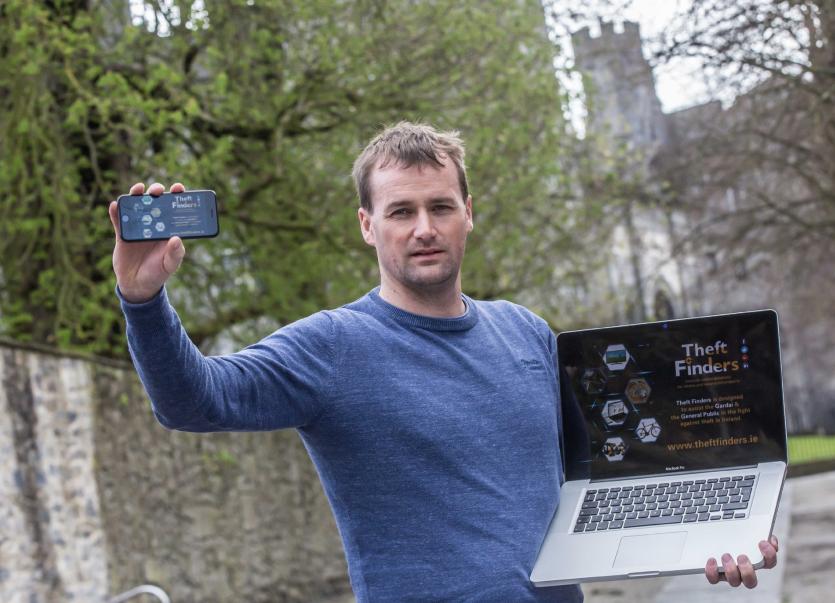 A new and free online database of stolen and recovered property set up by Kilkenny man, Ivan Sheridan, is reducing the risk of the public unwittingly buying stolen goods and is helping victims of theft locate their property much faster, its founder says.

Newly-launched www.theftfinders.ie allows members of the public to register, report and locate stolen or lost property, as well as register, locate and claim their recovered goods for free.

Sheridan, a 37 year-old father of three from Kells, set up the site after a close friend’s farm and business were robbed within weeks of one another. He had put distinguishing markings on some of the farm machinery, much of which was recovered after it was spotted for sale online. He hadn’t been quite so diligent where the business was concerned and nothing taken in that break-in was ever found, the former builder and publican who now also runs Kilkenny’s Black and Amber train revealed.

“Unfortunately one in four of us will be the victim of a theft or break-in over our lifetimes and seven out of every ten robberies, thefts or burglaries go unsolved and items are never recovered. We hope to buck that trend with TheftFinders.ie.

“Our site is designed to help such victims of crime recover their stolen goods.  It also assists the Gardaí, who often struggle to get recovered property back to its rightful owner when they uncover large caches of stolen goods. Items such as jewellery, power tools, phones and other goods can be difficult to identify unless their owners have noted serial numbers, any distinct markings etc,” Mr Sheridan said.

Theftfinders.ie also reduces the chance of opportunist criminals selling stolen goods on to unsuspecting members of the public, he added. “As the site develops, more and people are logging details, distinguishing marks, serial numbers and pictures of stolen goods, thus reducing the potential for those goods to be sold either online or at car boot sales and other events.

“If a member of the public spots something for sale which they suspect is stolen property and it matches the description of an item on our site, they can report it to the owner by simply pressing the ‘Report as Seen’ button. This notifies the owner of the exact location of their property in real time,” Mr Sheridan said.

Thefts are unfortunately a fact of everyday life now, with 12,000 cars and €2.5 million worth of mobile phones stolen in Ireland every year. As many as 7,000 bikes, many of them very valuable, are stolen each year and latest crime statistics put break-ins at about 2,000 a month across Ireland.

The site includes popular categories such as vehicles, household items and bikes as well as farm machinery, tools, jewellery, construction equipment, farm animals, pets, trailers, sports and musical equipment and more. It all means that it’s easier for visitors to spot something they’ve had stolen or might have lost and it’s easier for the public to report goods they fear may be stolen.

Theftfinders is hoping to make reporting and describing what is stolen a lot easier with a new feature on the site. The asset management section allows users create a portfolio of their own valuable goods such as jewellery, bikes, power tools, garden equipment and more.  Details required for logging items on the online portal include serial numbers, hallmarks, distinguishing markings on property, images of the property etc.

“The logging system is like a person’s very own safety deposit box and is set to be an invaluable resource for householders, but even more so for the construction, plant hire and farming communities which are often hounded by criminals,” Mr Sheridan added.

“If items in someone’s asset management section are stolen, details of the stolen items can be transferred to the stolen section at the click of a button. The list will also be an invaluable reference for the Gardaí, insurance companies etc. This feature will greatly increase a victim of crime’s chances of retrieving their property if they are recovered during Garda searches or other probes.

“This feature of the site is totally secure.  The only person who knows what a person puts into their Asset Management portfolio is the owner. We at Theft Finders can’t access this section, and we built it this way so the facility is safe and secure. While all other sections of the site are free, a small fee of €1 per item logged applies for the Asset Management Facility,” he explained.