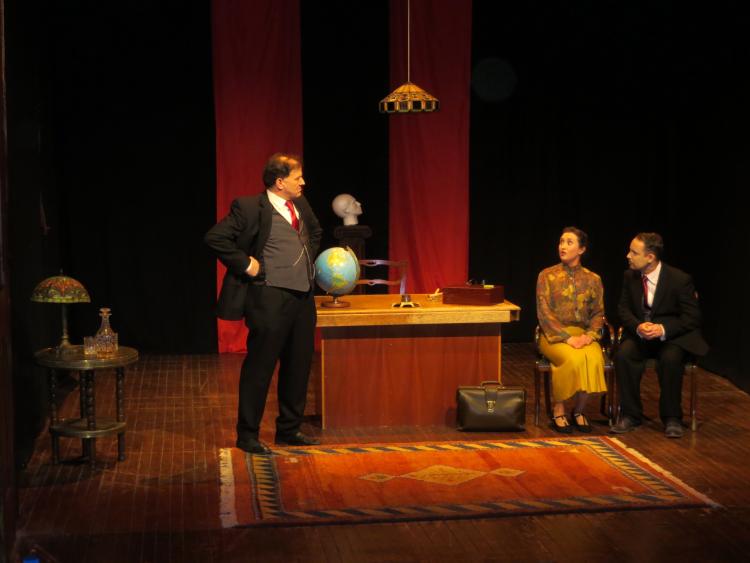 The Barn Owl Players have succeeded in mastering a brave and bold ambition in their latest endeavour - flawlessly performing two one-act plays from the much-celebrated playwright Tennessee Williams.
Early Desire opened last night and runs until Saturday at The Barn on Church Lane.
The first play Me Vashya is directed by Martin Matthews and stars Jim Carroll in the lead role of the formidable Vashya. Jim is well known on the local amateur theatre scene and once agains delivers a magnificient performance, engaging fully with the audience from start to finish. Eoin Nangle Ryan is an impressive Dr Frelich, who subtley masters and delivers the farcial elements of this work.
Natasha Murray, another long-serving member of the Barn Owl Players encapsulates the complexities of her character, Lady Shontine superbly and is a strong presence on stage. Seán Walsh is a relative newcomer to The Barn but is at ease on stage and is excellent in his role while John Whitely adds some comic relief in his depiction of the Prime Minister, Lord Huntingdon.
The set is magnificient and the lighting throughout the show is picture perfect.
After a short interval the audience can look forward to the second one-act by Williams - The Pretty Trap. A hilarious comedy set in the deep South this short piece is highly amusing to watch. Although the script offers much humour it is the sharp delivery by the actors that cements its comic tone.
Directed by Mags Whitely the play stars Delia Lowrey, Philip Brennan, John Prendergast and Rosey Hayes. All the cast are excellent in their roles and Delia Lowrey is outstanding in her interpretation of Amanda Wingfield, a mother who is also a very keen matchmaker.
Rosey Hayes is a beguiling Laura while Philip Brennan and John Prendergast deliver strong performances in their respective roles. Tickets are available on the door and walk ups welcome.