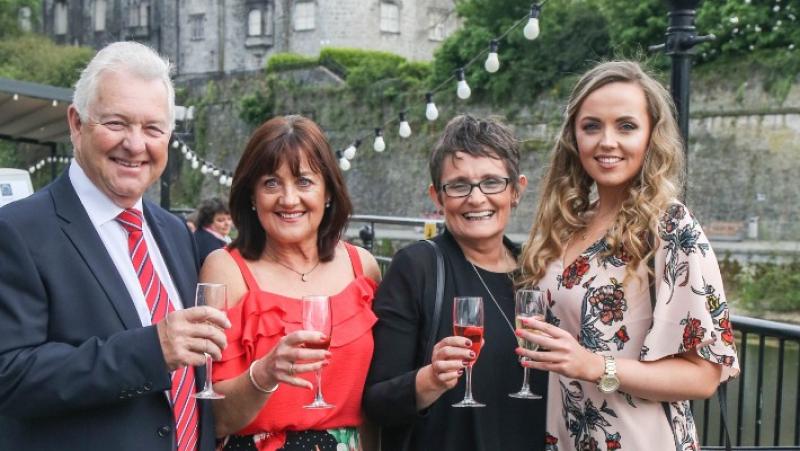 The Alliance Française of Kilkenny celebrated 70 years of teaching French and promoting French language and culture recently. At a gala event in the River Court Hotel some 80 convivial Francophones and Francophiles gather to celebrate and toast this significant milestone in their existence.

Guest of honour was the French Ambassador M Stéphan Crouzat along with M Thierry Lagnau, the Directeur Géneral of the Alliance Française in Ireland.

Also present were representatives from the other branches of the Alliance Française in Ireland in Dublin, Waterford, Limerick and Cork along with David Fitzgerald Chairman of Kilkenny County Council.

After a fine meal the attendees were treated to a selection of arias and song from the French repertoire by renowned tenor Patrick Rafter accompanied by his wife Maura. Then, music in an Irish idiom was provided by Mary and Áine Fitzgerald from Galway, with toe-tapping jigs and reels and tender ballads.

Speaking to the assembled guests the Ambassador M. Crouzat praised the work and dedication of the Kilkenny Alliance, and reminded listeners that the Alliance Française in Dublin is the biggest one in a non-French speaking country, and that recently Taoiseach Leo Varadkar  announced (in French) Ireland’s application to join the Francophonie, the club of French-speaking states, as an observer. This 57-member Commonwealth-style organisation is a way of fostering links between French-speakers particularly in Africa, where there is a huge French speaking population.

In her address President Therese White spoke of the founder of the Kilkenny Alliance: James Delehanty.

“I would like to say a few words about him.  I met him several times in the 1980s. I remember him as a courteous, softly spoken, rather shy person who never boasted of his achievements.  I learned of those much later. He merely mentioned that after the Second World War, in 1948, an important year, he founded the Kilkenny French Society.

From an early age, James Delehanty was passionately interested in all forms of literature - prose, poetry and theatre.

In the years 1940-50 he was attached to probably the most influential Irish literary magazine of the 20 century, “The Bell”.  The Bell was published monthly from 1940 to 1950, printing the works of our best writers: Frank O’Connor, Patrick Kavanagh, Liam O’Flaherty, Hubert Butler and others.  It was the liberal voice of Ireland, critical of censorship, of parochialism and clericalism. It opened the eyes of its readers to different European influences, to other forms of identity, reaching far beyond the narrow bounds of nationalism.

Due to financial problems and possibly pressure from various hostile quarters it ceased its activity in 1954.  To save that enormously important heritage several publishers, writers and our James Delehanty undertook the task of creating what is now known as “The Bell Index”, which includes all of the editorials, essays, short stories, poems and reviews ever published in The Bell.

The departure of The Bell created a void.  So, later on, in 1960 James Delehanty founded The Kilkenny Literary Society and became the editor of The Kilkenny Literary Society Magazine.  From 1960 to 1970 it was a major literary publication in Ireland, a vehicle for Irish literary talent.  Kate O’Brien, Seamus Heaney, Brien Friel, Frank O’Connor, Patrick Kavanagh, Hubert Butler, contributed with their prose and poetry to the wealth of Irish literature.

James Delehanty, being a Francophile and a connoisseur of French literature and history, wrote reviews of the works of Camus (that was the time when Camus was awarded the Nobel Prize) and essays with reflections on the French Revolution.

The Alliance Française will be enrolling for classes for adults in September, and then continuing its monthly cultural evenings. It also has a weekly gathering for French speakers in the Club House Hotel Bar on Thursday mornings from11am. All details are available on their website