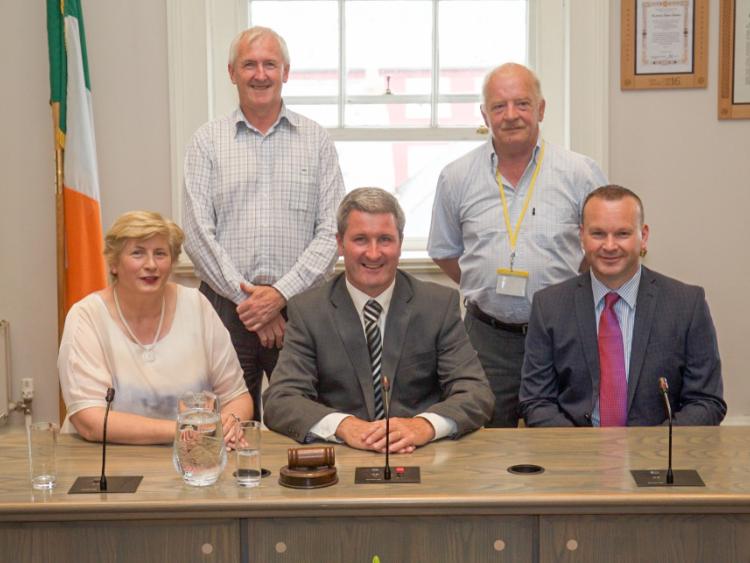 Tributes were paid to the outgoing Cathaoirleach of the Piltown Electoral Area at their AGM which was held last Wednesday.
Cllr Fidelis Doherty (Fine Gael) described it as having been ‘a great year’ and thanked her council colleagues and staff for their support.
She cited a number of projects as highlights of her term including the Tower Bridge Project, The New Ross Bypass and bridge (which is currently going through the public consultation process), the advancement of the Kilkenny Greenway, the opening of the Grannagh Recycling Centre and the Part VIII housing in Piltown.
Cllr Doherty added that other projects which deserved a mention included the Ferrybank library, the playground and park in Ferrybank, clarity on the Kilkenny/Waterford boundary and the North Quay development.
“There was a huge body of work dealt with last year but there are still issues that need to be deal with urgently including the provision of decent broadband in certain areas,” she added.
Cllr Pat Dunphy (Fine Gael) thanked her for her work and wished ‘her the very best going forward’ while Cllr Eamon Alyward complimented her ‘on a job well done’.
“You conducted yourself with dignity and ran meetings efficiently. You were a great ambassador for the area. I would like to nominate the incoming chair, Cllr Ger Frisby, who since coming onto the council in 2014, has been a great asset,” he said. His nomination was seconded by Cllr Pat Dunphy.
Newly-elected Cathaoirleach, Cllr Ger Frisby thanked his colleagues for their support and vote of confidence. He also thanked Fidelis who did ‘a very professional job’.
“I want to thank her for all her hard work. It is a great honour to be serving in the area and to enchance the ares. A huge body of work has been done over the past four years and we still have more to do,” he added.
“My job is to make sure meetings are orderly and efficient and that everyone has their fair say in how to enhance our area,” he said.
Cllr Frisby cited the Kilkenny Greenway as ‘a huge economic driver’ and also pointed out that the North Quay development ‘will open a gateway to the region’.
Cllr Pat Dunphy wished him the best and Cllr Fidelis Doherty congratulated him on his election and wished him good health. Cllr Tomas Breatnach assured the incoming Cathaoirleach of his support and thanked Cllr Doherty for all her hard work.
Cllr Melissa O’Neill said she was ‘looking forward to working with you for the year ahead’ and said that the group ‘worked as a good team locally and had good balance.”