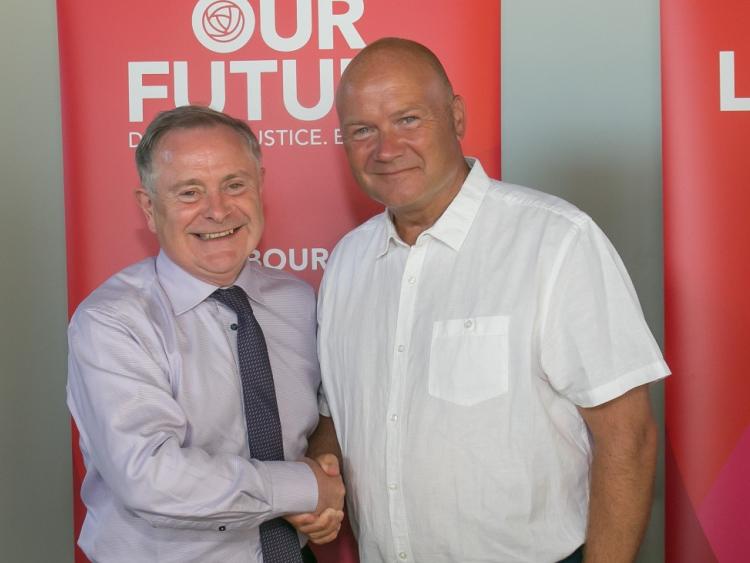 Labour leader Brendan Howlin with Denis Hynes who was announcing his intention to run in the next general election PICTURE: PAT MOORE

Siptu organiser Denis Hynes was elected as the new Labour Party candidate for Carlow-Kilkenny, at a selection convention yesterday evening.

Labour Party Employment Spokesperson Ged Nash described Mr Hynes as ‘the real deal for working people’ in the constituency. Senator Nash, who chaired the selection convention, said the Goresbridge man embodies the very best of the Labour movement’s long tradition of campaigning for and delivering on economic and social justice.

“He is the real deal for working people in Carlow-Kilkenny. It is extremely encouraging to see more and more representatives from the industrial side of our movement put themselves forward as candidates to represent Connolly’s party in the Dáil and at local council level," said Sen Nash.

“Frontline trade union officials like Denis, who work day in and day out to represent and organise hard working people know in their hearts that the only credible way to change laws, empower workers, improve pay and conditions, redistribute wealth and properly invest in public services is by rebuilding a strong and robust Labour Party.

“The people of Carlow-Kilkenny now have a real choice to make.

“They can elect to vote for Fine Gael & Fianna Fáil in high numbers if all they want is to see the status quo preserved. They can decide to vote for a party like Sinn Fein who say all the right things but whose commitment to democratic socialism is only skin deep.

“Or they can vote for the authentic voice of working people in Labour’s Denis Hynes.”