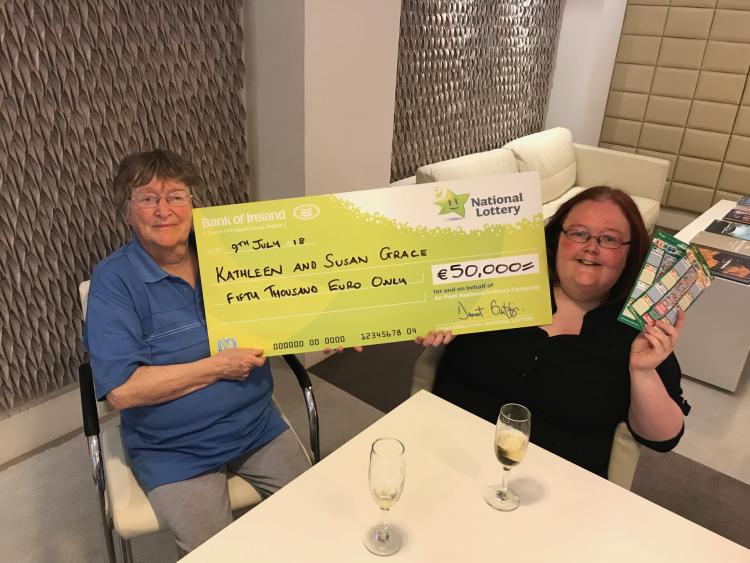 Kathleen and Susan Grace from Thomastown in Co. Kilkenny are pictured in the National Lottery winners’ room after they won the top prize of €50,000 on a National Lottery Bingo Times 10 scratch card

Lightening has struck twice for an incredibly lucky Kilkenny woman who today claimed a €50,000 National Lottery scratch card prize – around five years after she won over €50,000 on the Winning Streak TV Gameshow!

Susan Grace, from Thomastown in Co. Kilkenny, could not contain her delight in the National Lottery Winner’s Room as she collected a cheque for a cool €50,000 prize won on a €5 Bingo Times 10 scratch card which her mother, Kathleen, bought her at Dunphy’s Centra Store in her home town.

“I feel like the luckiest woman in Ireland,” grinned Susan Grace (40). “I don’t play scratch cards all that often, so I guess I am just very lucky. My mother bought me the Bingo Times 10 scratch card last week as a treat and I think she feared the worst as I started screaming the house down when I’d realised I’d won the €50,000 top prize!” she said.

The National Lottery has also confirmed that despite the top prize win, the €5 Bingo Times 10 scratch card still has four more top prizes of €50,000 still up for grabs.

The blessed Kilkenny woman is no stranger to big National Lottery pay-outs, having won €50,000 on the Winning Streak game show on RTÉ One in 2007.

“€50,000 is an incredible amount of money, and to win this amount a second time is like a dream. Winning €50,000 on the Winning Streak gameshow was truly life-changing for our family as it gave us the freedom to make a lot of improvements in our lives. I have a wonderful family behind me so I will be sharing this win with my mother and my brothers and sisters.”

Proud mother Kathleen gushed over her daughters kindness as she discussed her spending plans for her massive prize, “Susan is truly one in a million and this win couldn’t have happened to a more caring or generous person. As well as sharing the win with everybody in her family, she has already made plans for us to renovate our home and to upgrade our kitchen. She also wants to use the rest of her prize to refurbish her dad’s grave who passed away a number of years ago. I’m incredibly proud of her,” she said.

Want to share that winning feeling? Play Lotto. Wednesday’s Lotto jackpot is an estimated €5 million. Play in store, on the National Lottery App or online by 7:45pm by Wednesday night for your chance to win.

Nearly 30 cent in every €1 spent on all National Lottery games go back to Good Causes in the areas of sport, youth, health, community, arts, heritage and the Irish language. In total more than €5 Billion has been raised for Good Causes since the National Lottery was established 30 years ago. Applications are now open for the 2018 National Lottery Good Causes Awards. For more information, to apply and check eligibility criteria, visit www.lottery.ie/good-causes- awards.