Kilkenny War Memorial - For our tomorrow, they gave their today 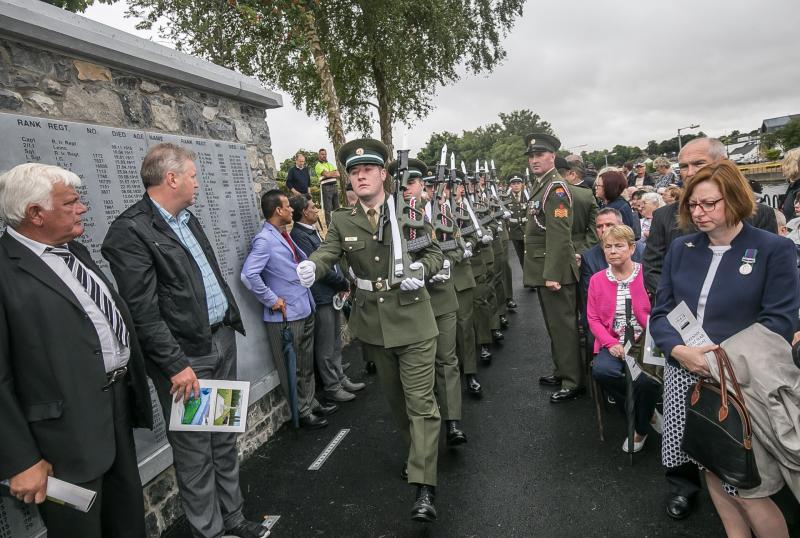 At the War Memorial

Well thanks be to God and His Blessed Mother. And the apostles. And all the saints in Heaven. Finally, at long, long last – some rain. And I was never as glad to see rain. In fact it was so welcome that my good wife and I went outside to look at it! I swear! And ah, the smell of it – I didn’t realise how much I missed that damp, wholesome, organic smell, One might think I was a poor farmer, with whom I very much sympathised, so welcoming was I of the soft, misty shower that gently ‘bathed’ the parched plants and trees and grass in our garden. And now I’m almost afraid to show my face in the local because while everyone else was revelling in our wonderful weather I was the guy pleading, praying almost, for rain! Damn it I was nearly hung out to dry (as if I wasn’t dry enough) for my exhortations. And now as their beautiful bronzed tans slowly fade into memory and normal complexions resume yours truly shall carry the burden of blame! Oh, woe is me.
Gentle rain
And perhaps it was fitting that a gentle rain should fall for the official unveiling of the Kilkenny World War 1 Memorial in the Peace Park last Sunday afternoon. As a youngster I always associated war with rain and mud and dark clouds and brooding skies. One reason had to do with the fact that war movies I saw back then were in black and white. In fact I was somewhat shocked when I first saw a war movie in colour, technicolour as they called it, and could not believe that the sun beamed down from beautiful blue skies while men shot and maimed and butchered each other. That wars took place on beautiful sunny days seemed totally alien to innocent me. Black and white made war seem far more acceptable and normal!

The Unity Singers sang ‘It’s a Long Way to Tipperary’ as we arrived for the unveiling. We so appreciated the music of the St. Patrick’s Brass & Reed Band and the Unity Singers who kept our spirits up throughout the long wait as the rain that I so welcomed earlier I now began to resent as it swished around my body, infiltrating the defences of my trusty brolly. And still several speeches to come! And may I say regarding those speeches – which weren’t many – they were apt and to the point.
Indeed I was half dreading the launching speech by Charlie Flanagan T.D. (you know how interesting politicians can be) but it was excellent. Not one irrelevant sentence or phrase, not one word wasted. It was a speech in fulsome praise of this historic city of ours and the efforts and achievements of the War Memorial committee. A Kilkenny man could not have written better! Mentioning the committee, as long as I know Dónal Croghan, the Chairman of same, I did not fully realise the time, the effort, and the tireless dedication this man gave to this project. Dónal, I salute you. And your committee. And our local council, especially Simon Walton and Colette Byrne, for their vital commitment, financial especially, without which this marvellous monument would not exist.
Moved
And I was very moved by the impassioned reading by Gerry Cody of the poem, ‘Armistice Day 2009’ by Orla Parkinson who was meant to read her own composition but who sadly passed away earlier in the year (a story in itself but not for now) I was also intrigued by Finbar McCarthy’s rendition on the bagpipes of ‘The Piper’s Lament’ which I recognised as ‘The Dawning of the Day’ and which many people would recognise as ‘Raglan Road’ penned by the poet Patrick Kavanagh to the air of ‘The Dawning of the Day’. And then ‘The Last Post’ which always sends a shiver down my spine but it was when our National Anthem, Amhrán na bhFiann, played out beneath our tricolour that the tears began to flow. Standing beside this monument to the brave Kilkenny men, and women, who gave their lives for ‘the freedom of small nations’ I couldn’t but think of the men in uniform in my own life - my father, God rest him, a soldier in the Irish army and my grandfather, a British soldier - but that, for certain sure, is a story for another time, another place.