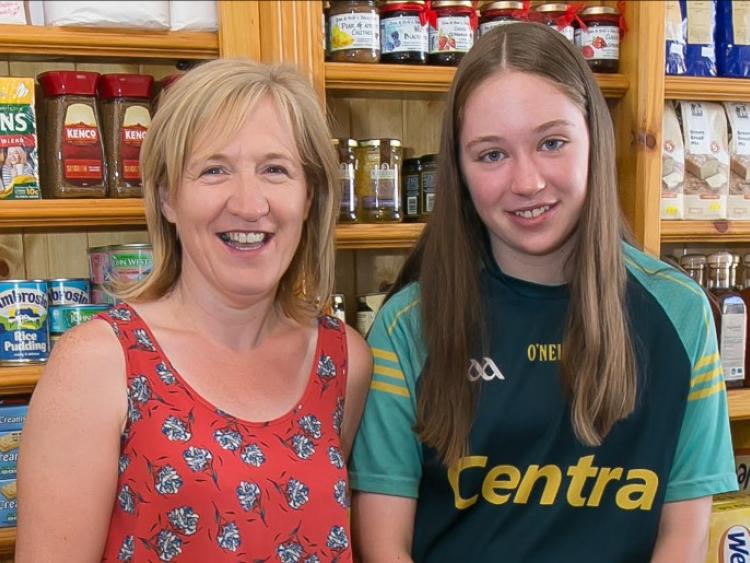 Noeleen and Louise Hearne (12) at the opening of the Tea House in Ballyhale PICTURE: PAT MOORE

Banter and chat was the order of the day at the opening of Billy’s Tea Rooms and shop in Ballyhale when it opened last week.
After almost three years a wonderful plan has come to fruition and looks set to flourish.
In August 2015 a dedicated team of volunteers came up with an idea to rejuvenate the village that had seen multiple closures which drained the life out of the Main Street. There was no shop and if you lived in the village without a car you were dependent on the goodwill or others to do your shopping. The village was faltering but the community spirit was strong.
The committee behind the venture decided to go about securing a building, known locally as Billy’s Cottage. Cllr David Kennedy, a Ballyhale native, did trojan work on the project and the building, was secured from Kilkenny County Council for a nominal lease of €1 per week.
The renovation of the cottage has transformed the space with vintage style decor and upcycled furnishings by the talented team at Task, who transform furniture giving it a new lease a life. A number of custom made pieces were crafted for the premises by joiner, Paul Butler.
On Wednesday at 8am the shop opened - it is the first time in six years that the village has had a shop. It is well-stocked and the team of volunteers welcome feedback. There is also an array of artisan local produce, including Mileeven honey, Bob and Joe’s Honey, Rapeseed oil from Urlingford and Mosses Mix stocked along with all the basics.
There is also local craftwork for sale and a novel book exchange.
The tea rooms opened at 9am and by 10.30am the place was packed with people enjoying an array of home-cooked and baked fare.
David Murphy, secretary of KBK explained how the shop and tea rooms are run by a team of 38 volunteers and the main chef is Marian Walsh, who runs Cookies and Co in Knockmoylan.
“We are keeping the prices reasonable and any profits that are generated go back into the community. The reaction has been excellent,” said Mr Murphy.
Pat Bookle is originally from Thomastown but has been living in Ballyhale for 50 years.
“It is marvellous, there is no doubt about it,” he said. “The village was dead - it’s brilliant to see life back in it.”
Nora Dermody, who is also involved in the local Women’s Guid said that after a number of businesses closed in recent years people used to comment how ‘there was nothing in Ballyhale’,
“That was not true, we always had the hurling but it is fantastic to see the shop and tea rooms open.
Local resident, Liam Power agreed that it was ‘very positive’ for people living in the area.

The shop and tea rooms are open daily.