New book on War of Independence and Civil War in Kilkenny 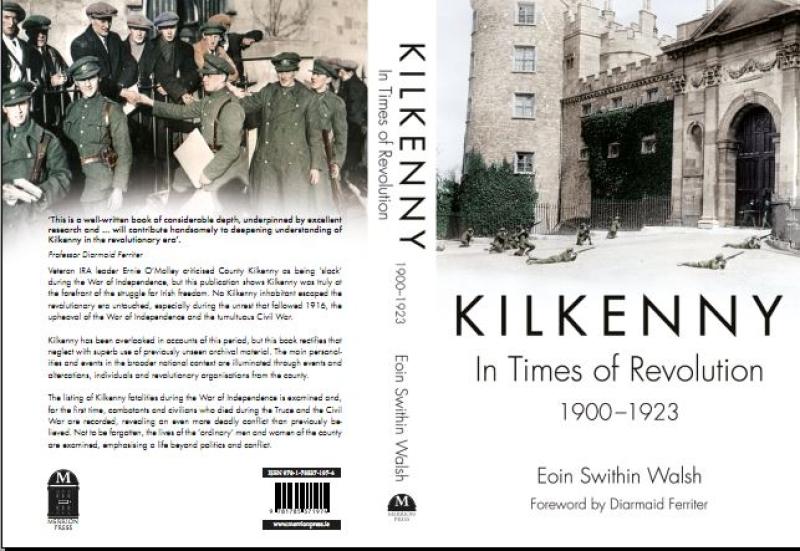 The cover of the new book by Eoin Swithin Walsh

This January will see the start of the centenary commemorations marking 100 years since the beginning of the Irish War of Independence (commencing 21 January 2019).
With this anniversary and the 2016 commemorations just passed - along with the centenary of the Civil War on the horizon - I thought now would be the opportune time to research and reassess County Kilkenny during this ‘revolutionary era’.
While researching the new publication, Kilkenny, In Times of Revolution, 1900-23, it was clear from the outset that there was an emotional rollercoaster of topics to be covered.
Revolution and war, by their nature, inevitably throws up a range of stories. On one side of the scale, there was the mundane and often humorous, but on the other hand, there was inevitably tragedy and heartbreak.
As historian Eunan O’Halpin has noted, establishing an accurate figure for fatalities during the revolutionary period ‘is a very crude index of the intensity of disruption experienced by people and communities’. Nonetheless, it does at least highlight, to some degree, the suffering of the families that lost loved ones in Kilkenny.
Over the next three weeks, I will list those who died during the War of Independence, the Truce and the previously undocumented Civil War in Kilkenny or those with Kilkenny connections killed outside the county (including a brief synopsis of the circumstances of each incident).
At all times I have endeavoured to be as objective and as unbiased as possible, without favouritism as to which ‘side’ (or none) a person was on.
What came as the biggest surprise was that more people died as a result of the 11month Civil War than during the two-and-half year War of Independence.
This week I will begin with the fatalities in the Kilkenny Brigade Area during the Irish War of Independence and Truce periods. This includes the deaths in the parish of Mullinahone, Co Tipperary, which was part of the very active 7th Kilkenny Irish Volunteer/IRA Battalion.
All available evidence suggests that 22 people were killed in the Kilkenny Brigade area as a direct result of War of Independence activities (it includes those who received their fatal wounds in Kilkenny but died elsewhere).
The fatalities include seven Irish Volunteer/IRA combatants, three RIC, two Black and Tans, one Auxiliary, one British military, four informers and four civilians.
It places Kilkenny in joint-20th position in the gloomy ranking of War of Independence deaths in Ireland’s 32 counties. All but two of the 22 deaths occurred in the violent final eight-month period of the War of Independence between December 1920 and July 1921.
Contradicting the national trend, the number of Irish Volunteer/IRA fatalities in Kilkenny was equal to the number of Crown Forces fatalities in the county (nationally, Crown Force fatalities were higher than IRA fatalities).
The average age at death, encompassing all 22 fatalities in Kilkenny, was 30.6 years. Also included are the two fatalities during the Truce period in Co Kilkenny (July 1921-June 1922).
Note: those Kilkenny natives who were killed outside the county are not included in this particular listing (as it only deals with those within).
Thus, Peter Freyne from Thomastown, who was killed by Crown Forces in Dublin in April 1921 is not included, neither is RIC Constable James Phelan, a native of Lisdowney, who was killed in an IRA ambush in Co Kerry. Similarly, three British military personnel - Frank Lord, George Frederick Heppenstall and Andrew Walsh - who were killed in an accidental explosion in Castlecomer colliery in August 1919 are not included.
Kilkenny, In Times of Revolution, 1900-1923 is published by Merrion Press on 13 August 2018. It includes more detailed accounts on all persons who died.

William Kenny (Graignamanagh) - died August 30, 1920, Ex-British soldier, he was executed by drowning by the 5th Battalion IRA for accompanying the military and helping guide them during raids in the local district.

Sgt. Thomas Walsh (RIC, from Ballyragget) - died 20 December, 1920 - Accidently shot dead by a soldier(s) from the Devonshire Regiment during a search of an area south of Callan following an IRA ambush at Ninemilehouse earlier in the day.

Margaret Ryan (Callan) - died December 23, 1920 - Died from abdominal bullet wounds suffered two days previously in Callan, following firing from a lorry of Auxiliaries as the funeral cortege of RIC Sergeant Thomas Walsh passed through the town. She was pregnant at the time of her death.

Michael Cassidy (Castlecomer) - died January 5, 1921 - Shot in his place of work by an outside IRA unit as he was found guilty of aiding Crown Forces in the area.

Thomas Hennessy (1st Batt IRA, Threecastles) - died February 21, 1921 - Shot dead by the military while attempting to disarm a soldier in Friary Street in Kilkenny City. The ambush was planned by Hennessy’s brother Tim.

Thomas Dollard (Kilkenny City) died February 21, 1921 - Shot by Crown Forces during the Friary Street ambush as they believed he was one of the ambushers as he ran from the scene of the fighting.

Michael Dermody (1st Batt IRA, Threecastles) died March 4, 1921 Shot by the military while attempting to disarm a soldier during the Friary Street Ambush. He remained unconscious after the incident, passing away two weeks later.

Ernest Riley (Black and Tan) - died March 12, 1921 Shot by the IRA at Garryricken House, west Kilkenny, during an escape by the 7th Battalion ASU who had been surrounded by Crown Forces in the place they were resting.

He was not the intended target but accidentally stumbled across the men at the rear of his house. Instead, another officer known as the ‘Foxy Officer’, was the assassination target.

Thomas Phelan (Ballyragget) - died April 21, 1921 Shot dead by British soldiers near his home in Oldtown, Ballyragget, when he failed to halt.

Sean Quinn (IRA (7th Batt) & Flying Column Mullinahone) died May 13, 1921 Mortally wounded in Knocknagress, near Tullaroan, having been shot by Crown force soldiers while trying to escape from a military cordon.
Died in Kilkenny Military Barracks later that day.

Martin Dermody (Tullaroan) and Michael O’Keeffe (Carrick on Suir) died May 16, 1921. Two ex-British soldiers, who had served during the Boer and First World War, were executed by the 7th Battalion Flying Column for informing the Crown Forces on the location of the IRA, leading to the deaths of Patrick Walsh and Seán Quinn.

Patrick Walsh IRA (8th Batt & Flying Column) - died May 18, 1921 - Mortally wounded in Knocknagress, near Tullaroan, on 13 May 1921 while trying to escape from the military.
He died in the military hospital in Fermoy, County Cork, during an operation to amputate his leg.

Leonard James French (Auxiliaries) died June 10, 1921 - Fatally shot while trying to avoid being captured by the 5th Battalion IRA when dressed in civilian clothes on a reconnaissance mission at The Rower.

Albert Bradford (Black and Tan) died June 18, 1921 Shot by members of the 9th Battalion IRA during an ambush of a Black-and-Tan cycle patrol at Sinnott’s Cross, Tubrid, Mooncoin.

Sgt. John William Reynolds (First Lincolnshire) died July 11, 1921.
Received bullet and bomb injuries while on patrol in the village of Mullinahone, Co Tipperary, on the evening of 10 July 1921 by members of the Mullinahone Company of the 7th Kilkenny Battalion.

Fatalities during the Truce
Major Cyrus Hunter Regnart (Auxiliaries) died July 20, 1921. Committed suicide by shooting himself at Woodstock House, Inistioge. He had only joined the Auxiliaries six weeks earlier having been demobilised from the British Army. His remains were returned to England.

Michael Byrne (IRA 5th Batt. The Rower) died December 10, 1921. Byrne was demonstrating how to use bombs at his home in Kiltown, The Rower, when one unexpectedly exploded. He died the following day in New Ross as a result of burns and a fractured thigh.