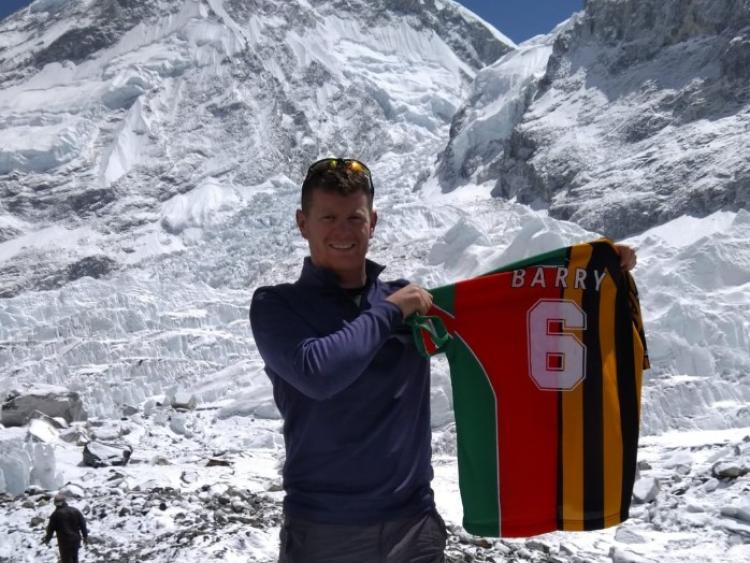 Conor McQuillan from Kilkenny at the base camp on Mount Everest

The world’s tallest mountain has been claimed by city GAA club, James Stephens.
One of the famed club’s senior hurling stars, planted the Village colours at the base camp of the famous summit a few weeks ago and word has now filtered back.
Conor McQuillan, fulfilled the ambition of a lifetime following his visit to the top of the world.
He also raised over €5,000 for two excellent charities in the process.
From Cashel Downs on the city’s Waterford Road, Conor along with a number of friends, signed up to climb to the Mount Everest base camp in the Himalayas.
The adventurous group first flew to Katmandu, capital of Nepal and then on to Luckla, which is 2,000 feet above sea level which was their base for the beginning of the expedition,
At that point the tortuous, six day (and nights) journey, through treacherous Himalayan terrain, began in their bid to reach their destination, the Everest base camp at 17,000 ft. (5,300 metres) above sea level.
Conor told the Kilkenny People that as you climb the air gets thinner and bitterly cold making breathing more difficult for the adventurers, particularly, at night as you try to get some sleep, mostly in vain.
During the climb the group witnessed a small avalanche, thankfully in the distance, as blocks of ice separated from the mountain and came tumbling down at great speed.
They were never in any danger but the reputation of the mountain as one of the most dangerous places on earth was brought home to them, ensuring there was no let up in their vigilance.
When they reached base camp, Conor planted a Kilkenny/Village jersey given to him by fellow club man, Tomas Keogh just to say “the Village was here”.
The descent only took three days as it all downhill and the air got thicker as they got closer to Luckla.
Conor’s trip was self funded but for his supreme efforts, Conor raised €5,600 in sponsorship which was divided equally between his nominated charities; the Kilkenny based suicide awareness charity, Teach Tom and Vamda Irl, an orphanage run by Irish volunteers in Zambia.
Conor acknowledged and thanked the club and all who contributed to the sponsorship fund.