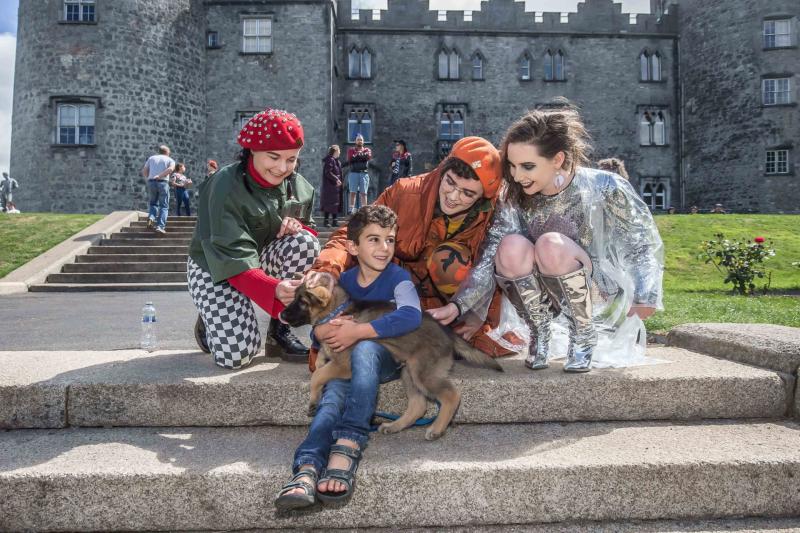 assan Zabad (5) with Max his puppy with Karen McCartney, Aoibhéann McCann and Martha Breen members of the cast of Rough Magic and Kilkenny Arts Festival’s production of A Midsummer Night’s Dream by Wi

Minister for Culture Josepha Madigan has officially opened the 45th Kilkenny Arts Festival at a reception in Butler House Gardens.

The festival line-up boasts a series of world premiere productions and Festival commissions, immersive music series to dive or dip into, a new take a much-loved Shakespeare comedy, the first-ever Irish staging of one of the greatest operas, unmissable exhibitions and a host of talks, debate and discussion - the 2018 Kilkenny Arts Festival offers new ideas and unforgettable experiences to enchant audiences of all kinds. Many performances over the next 11 days will take place in the iconic historic buildings of Ireland’s medieval city.   Few festivals in the world can boast such atmospheric and evocative spaces, echoing their history but ideal for performance and embracing the audiences of today.

Speaking on the opening of the Festival Minister for Culture, Heritage and the Gaeltacht Josepha Madigan TD commented, “Creative activity, festivals, welcoming visitors and showcasing the arts is part of the fabric ofKilkenny. The strength of programming, the quality of artists and the excitement that comes to Kilkenny when the city is in-festival, is testament to the festival team and the Kilkenny community. It shows too the strength and importance of the arts in every community right across Ireland.”

Festival Director Eugene Downes said: “Our 45th Festival is bringing together artists and audiences from Kilkenny, Ireland and across the globe to create and share unforgettable experiences.  Our new productions of A Midsummer Night’s Dream and The Return of Ulysses have been generating huge excitement and anticipation as we head into an action-packed opening weekend.”

Kilkenny Arts Festival 2018 will feature several firsts. The Festival returns to the magical Castle Yard with a bold new take on Shakespeare’s A Midsummer Night’s Dream in a co-production with Rough Magic,the first time a production has been specially created for this unique open-air space. Always a big hit with locals and visitors alike, Shakespeare in the Castle Yard promises a fabulously funny and magical night under the stars with a brilliant young Irish cast directed by Lynne Parker.

The Festival will also present world premiere productions of new Festival commissions: Inventions, by Irish Modern Dance Theatre set in the former Carlton Ballroom with an international cast led by the legendary Valda Setterfield and Oona Doherty; and The Lightkeepers’ Last Stand, a free aerial circus show for all ages by the awe-inspiring Loosysmokes, playing in Kilkenny Castle Park twice daily.

The music programme offers a more diverse range of concerts than ever, from morning till late at night: Brahms in the Afternoon, a ten-day journey through the chamber music masterpieces of the great romantic composer featuring leading classical stars from far and near; Later Beethoven, a three-concert series by the Festival’s resident ensemble, the Irish Chamber Orchestra, contrasting Beethoven’s astonishing later works with thrilling 21st-century compositions; mesmeric musical collaborations in the Marble City Sessions hosted by renowned fiddler Martin Hayes; and a mouth-watering series of ‘beyond genre’ artists, including a new jazz series - the Sofa Sessions - and a special celebration of the late Kilkenny music legend Willie Meighan in partnership with the city’s famous Rollercoaster Records.

Actor Stephen Rea returns to the Festival to perform Derek Mahon’s epic poetic sequence New York Timein the premiere of a new musical setting, and the great Eavan Boland is the Festival’s poet in residence. In the Spoken Word strand the Festival delves into contemporary issues like fake news and Brexit and pulls at the loose threads of history with fresh thinking on iconic Irish heroes, featuring a roster of national and international guests including Newsnight presenter Evan Davis, former Taoiseach Bertie Ahern and doyenne of Irish diplomacy Anne Anderson.

Exhibitions of art and design include stunning new shows at the Butler Gallery and the National Design & Craft Gallery, while architecture is prominent this year with Kilkenny Visions, a thought-provoking exhibition of new plans for Kilkenny’s cultural future in partnership with the UCD School of Architecture, and a much-anticipated lecture from Irish architectural stars Yvonne Farrell and Shelley McNamara, curators of the 2018 Venice Architecture Biennale.

The Festival’s hugely popular series of Secret Gardenfree pop-up performances returns twice daily in a trail of exquisite historic gardens across the city, and bursts out onto High Street for the first time on both weekends.