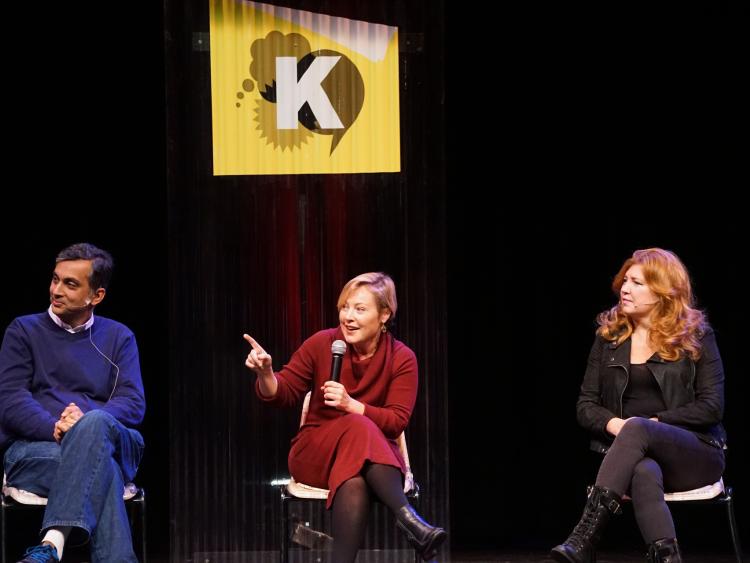 US Editor of the Financial Times, Gillian Tett (Centre), makes a point to an audience at Kilkenomics 2017. Also pictured are US economists, Mihir Desai (L)and Pippa Malmgren (R)

Ten years on from the global financial and economic crisis of 2008 which set the world into such profound turmoil, Kilkenomics is back in Kilkenny City from November 8 to 11.

Kilkenomics - the world's first and only festival of economics and comedy - celebrates its 9th edition with an unmissable programme of essential conversations that includes some of the world's most insightful contributors in the company of the very sharpest comedians.

Highlights of the packed schedule of fascinating talks and events include David McWilliams' interview with Jeffrey Sachs, undoubtedly one of the most important economists in the world today and a global leader in sustainable development; The American Century with Harald Malmgren who advised US Presidents from JFK to Nixon; Millennials with Neil Howe, the man who coined the term; and The Great Economists: How Their Ideas Can Help Us Today with Linda Yueh.

Dozens more intriguing shows are have been announced at www.kilkenomics.com featuring topics such as Big Data, Dangerous Minds, Cryptocurrency, Strongman Economics, Happiness and Wealth, Sport, Millennials, Populism, Jargon-Busting, What Have We Learned since 2008? and even, How to Make Economists Better, as well as lots on Brexit and Trump.