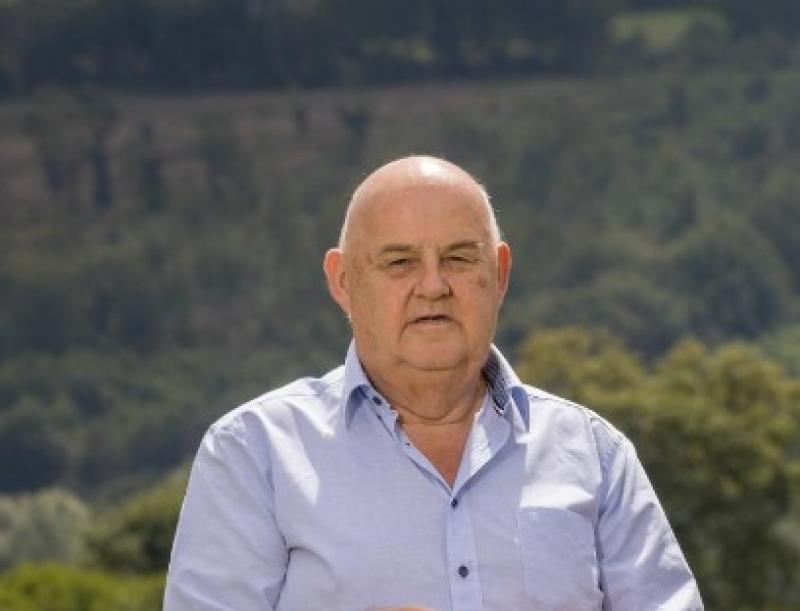 The late Johnny O'Shea pictured where he loved most, on the land in Piltown, County Kilkenny

Anyone who knew the late John O'Shea (Johnny Shea) from Piltown was familiar with his sayings.
One of his most famous, according to Fr Paschal Moore who gave the eulogy at his funeral Mass was: ‘In the name of God, let’s drive on.’

“He liked to finish every meeting like that and that’s what he did, he drove on himself and he drove on the people around him to do great things,” he told a packed parish church in Piltown.
“And that is also what the man with the big heart is asking now in the wake of his death, for all of you to keep going,” Fr Moore, the main celebrant at John's funeral Mass said.

And he had the huge congregation smiling when he quoted another of Johnny’s lines at the end of his homily: “Let’s be off with you there now, was the way a lot of encounters with Johnny ended and now I have the task of telling Johnny to be off with himself now, to heaven,” Fr Moore added.

In between quoting the 65-year-old who passed away two weeks ago after a long battle with illness, Fr Moore spoke of the many qualities that John possessed and how he had been a true Christian.
In keeping with his personality, John had told his family before he died that he didn’t want any of the usual trimmings at his funeral, no special offertory gifts, very much like a man he greatly admired, the late Bishop Laurence Forristal.

Fr Moore described the impact of John’s death as a dark cloud over the entire parish.
He spoke of his joviality, determination and goodness and how he had touched every strand of life around Piltown in a positive way.
“Johnny died as he lived, with no fuss and with a calmness, a resignation to his fate,” Fr Moore said.
He also explained part of John’s success was down to his ability and his willingness to listen to people, their problems and their concerns.

The attendance at his funeral Mass in Piltown reflected his popularity and the huge amount of respect people had for him.
“We have been robbed of a great community man, a leader,” Fr Moore added.
He also highlighted John’s great sense of humility, boundless energy and above all his time for other people.