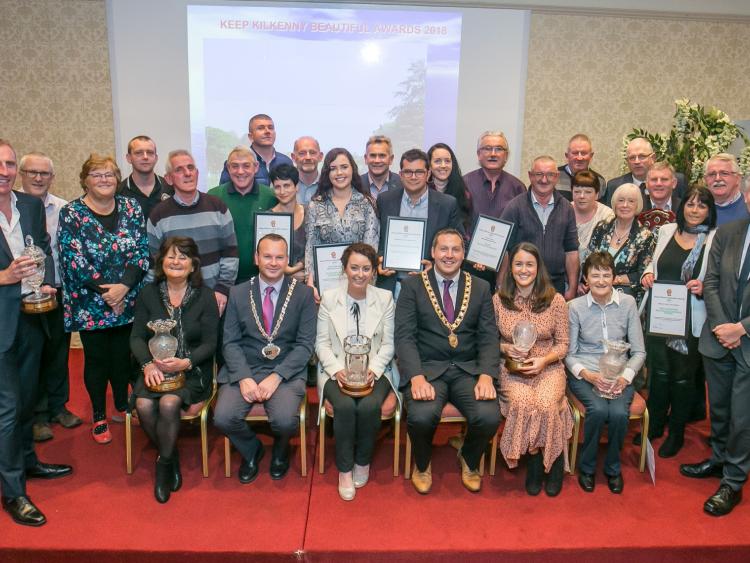 The stars and unsung heroes behind Kilkenny’s long legacy of Tidy Towns excellence were out in force for the annual Keep Kilkenny Beautiful (KKB) awards night at Springhill Court Hotel last week.

Dozens of local businesses had cause for celebration, either winning or being highly commended in their category, while several local estates were feted also.

SEE FULL PICTURE GALLERY OF WINNERS ON THE NIGHT

Unfortunately, the drought of this summer and resulting hosepipe ban lead to the cancellation of the usual Private Garden category. However, competition organisers say it will be back next year.

The night capped off another bumper year for the city, which thanks to the efforts of volunteers, local businesses and Kilkenny County Council, heralded multiple successes. Mr Bluett noted that in 2018, Kilkenny received four Tidy Towns awards, including a Gold Medal. Kilkenny’s score was seven points higher than its 2017 result, losing out to overall winners Listowel by just two points.

In the Tidy Towns report, the adjudicator said it was ‘an absolute pleasure’ to visit Kilkenny.

“We are one of the most consistent towns in the competition over the years,” said Mr Bluett.

He pointed to the numerous areas where there have been advancements in recent months, including efforts to remove Balsam from the river, the cleanup of numerous open spaces, as well as the planting of many trees and bulbs. KKB still has bulbs for distribution if people are looking for them for their area.

Cathaoirleach Eamon Aylward, who had arrived from a bio-diversity conference earlier that evening in the Medieval Mile Museum, said there had been people there from 46 countries, all of whom had only good things to say about Kilkenny.

“To have that kind of feedback from them really filled me with pride,” he said, presenting prizes along with Mayor Peter ‘Chap’ Cleere.

“It’s you — the volunteers and people who get up and out every morning and keep this city in the beautiful condition it is.”

The Heroes in our Community award was sponsored by McDonalds Kilkenny, with Chris Pimm in attendance to present the awards. There was a huge cheer when the award was presented to the World War I Memorial Committee, who were on hand to collect it.

“One man and a hard-working committee were behind it,” said Mr Candler.

“It has added superbly and is done very tastefully, and honours those who lost their lives in the war.”

Special guest speaker on the night was Mary Cashin, acting environmental awareness officer at Kilkenny County Council. Ms Cashin said the event was a fantastic opportunity to acknowledge all who participated and helped keep Kilkenny beautiful.

She spoke on the theme of sustainability, which she said has never been as important. She also congratulated Kilkenny City, Inistioge, Tullahought and Windgap on their recent successes.

Mr Bluett thanked the Springhill Hotel for providing the venue, and St Canice’s Credit Union as primary sponsor. MC for the evening George Candler acknowledged the volunteers and said the success would be impossible without Kilkenny County Council.