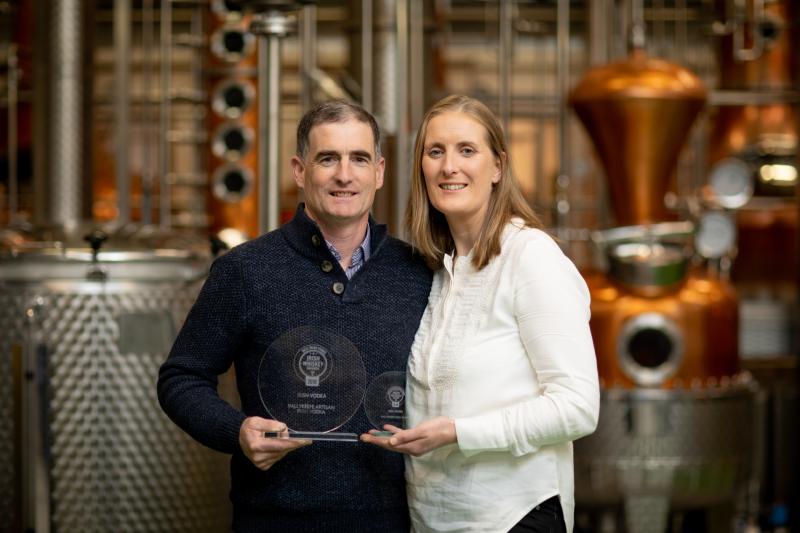 Morgan Ging, owner and Managing Director, Ballykeefe Distillery, was delighted referring to the fact that “2018 has been a fantastic year for Ballykeefe Distillery in terms of awards and recognition. It started earlier this year when our Gin came third in the world at the San Francisco Global Spirit awards, that's the Oscars for spirits worldwide, we then won the highest award of Master Class for our Poitín at the Global Spirits Masters in London and I am very pleased to end the year with these two top awards for our Poitín and Vodka at the Irish Whiskey Awards"

Ballykeefe Distillery has also invested heavily in sustainability and is a flagship partner with An Bord Bia and the Origin Green program, having fully integrated the distillery to the Family Farm to achieve zero waste and a low carbon footprint. The distillery’s efforts on sustainability were recognised in an award at the 2018 Irish Food and Business Awards.

Carmel Nolan, Director of Sales and Marketing, Ballykeefe Distillery, said that she is; "delighted to have an exciting range of award-winning products to offer customers looking for something special for themselves or to give as presents as we approach the Halloween and Christmas holidays."

Ballykeefe Distillery, which has been the number one tourist attraction in Kilkenny throughout the summer has launched four new limited editions to their spirit range at Savour Kilkenny, a Slo Gin,  an Aged Vodka, an Irish Moonshine with exotic spices and a special Gin called Lady Desart, named after the famous benefactor and former owner of the estate where  Ballykeefe Distillery is located close to Cuffesgrange.

The attendees were also the first to sample the brand-new limited edition range of Ballykeefe spirits and feedback on the products, as well as the Christmas Party Package was overwhelmingly positive, with everyone admitting that it really put them in the Christmas spirit!