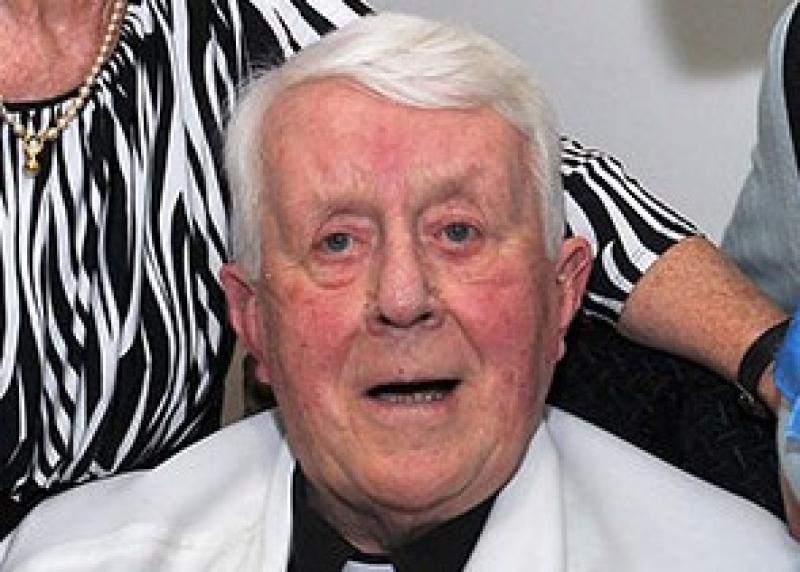 Although he was 87 years of age, the news of the death of Bishop Emeritus of Ossory, Dr Laurence Forristal was greeted with huge sadness, in particular, by young people on social media.
And at Sunday’s championship matches in Nowlan Park, there was a minute’s silence observed in his memory.
He loved hurling and had an encyclopaedic knowledge of Gaelic Games and of Kilkenny history, being a disciple of Canon Corrigan’s History of Ossory.
The simplicity in his life was reflected in his funeral Mass when he asked that there be no embellishments.
“That request came out of a profound understanding of the mystery of life and death,” according to the current Bishop of Ossory, Bishop Dermot Farrell who gave the homily at the funeral Mass in a packed St Mary’s Cathedral on Saturday.
Highly academic, Bishop Forristal was a canon lawyer with a real interest in jurisprudence.
He was perceptive, persuasive, thoughtful and above all he was cognisant of his own shortcomings and apologised for them on many occasions.
Monsignor Michael Ryan worked closely with Bishop Forristal for many years
“He became our bishop in 1981 and I remember him saying at that time, ‘I dedicate my life to the people of Ossory.
“And looking back on his 26 years as a bishop, I think that word, dedication, sums up so much about his life,” Mons Ryan said.
“He had an extraordinary commitment to his work as a bishop and his pastoral care for people was extraordinary,” he added.
His honesty often made people feel uncomfortable and at a Confirmation in the diocese some years ago, he wondered if asking the 13-year-olds present to pledge to abstain from alcohol was futile because some of them he felt were already drinking.
He was never as comfortable as when in the company of people from his own part of Thomastown and living close to Jerpoint abbey clearly impacted upon him as he had a fascination with history, archeology and local heritage.
He has been praised for his work in child safeguarding which included the 1996 publication of the document, Child Sexual Abuse: Framework for a Church Response.
At his funeral Mass, Bishop Farrell said, Bishop Forristal had offered a life of service to the people of Dublin in various appointments, as Vicar General and in parishes such as Raheny and in building the new parish of Rivermount into a living Christian community.
HOMECOMING
“A Thomastown native and a Kilkenny man to the core, it was merely a homecoming for him when he was appointed Bishop of Ossory in 1981.
“He offered a life of faith, courage, and conviction that God is everything.
“His life was a landscape where God was seen. He enthusiastically put his gifts to use in the service of the church. What he had received he handed on to us. So has it ever been in the Church and, so shall it be through you and me.
“He had an abiding interest in people; he spent time with them and enjoyed the company of a very wide circle of friends especially, if they had lots of time to talk to him.
“ He was a great raconteur with a great wit and a sense of humour. His memory for parochial and sporting details was the stuff of legend.
“He was immersed in Kilkenny hurling; he could recall every match, who played where and, who scored,” Bishop Farrell said.
“Following his retirement, he increasingly entered into the communion of Christ’s sufferings; increasingly he understood the truth of the words: “Somebody else will put a belt around you and take you where you would rather not go (Jn 21:18).
“Bishop Forristal offered a life devoted to prayer. In prayer, he discerned the voice of the Lord, saying, follow me.
“Throughout his 63 years of priestly life he did not place any barriers in the way of the original summons which God placed in his heart.
“Prayer was not just part of his life, it was central to his life and enabled him to distinguish God’s footsteps among the welter of interior noises.
“ Every day he set aside a portion of the day for God and God alone.
“As a canon lawyer with a particular interest in jurisprudence, he offered a compassionate interpretation of the law.
“We often times hear a narrative that canon lawyers are insensitive and out of touch with the ordinary lives of people. Bishop Forristal belied that portrayal with a pastoral approach that took into consideration both the general and the individual aspects of a person’s life. For him, this interpretation did not remain something just theoretical, but translated into feelings of compassion and tenderness towards those who suffered.
Grave issues

“It would be remiss of me to let this day pass without acknowledging Bishop Forristal’s contribution to addressing the grave issues, serious wrongs and past failures that have come to light in the past 25 years, as the scale and depth of the sexual abuse crisis have been revealed.
“This scandal has undermined the lives of many children and vulnerable people; it has eroded trust and goodwill, and hangs like a cloud over all who seek to witness to the Good News of Jesus Christ,” Bishop Farrell said.
“ It is fair to say that the years 1994 to 1996 were tumultuous for the Church as the reality of crimes by clergy against children began to come to light.
“As the Church began to respond to these failures Bishop Forristal chaired the Committee that was to listen to and learn from the experience of all sectors concerned for the wellbeing of children. The Committee was multi-disciplinary and its work necessitated a very broad consultation process. His wisdom, his effectiveness, and his sensitivity as Chair were pivotal in producing the so-called ‘Green Book’ (Child Sexual Abuse: Framework for a Church Response).
“When it was published in 1996, the Green Book gained wide acceptance as a solid foundation upon which the Church could address this scandal which damaged so many lives, and which still has so many negative effects for individuals, for relationships, for families, and for communities, including the community of faith.
Bishop Forristal died on October 10 (peacefully) at St Luke’s Hospital.
He is survived by his sisters Kathleen, Nan and Mary, brother-in-law Eamon, sisters-in-law Maureen and Geraldine, nephews, nieces and his extended family.