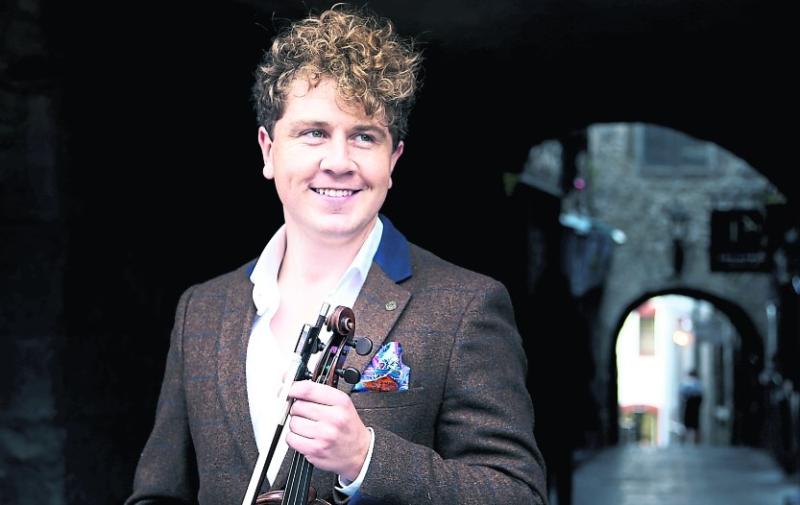 Internationally acclaimed Kilkenny violinist, Patrick Rafter returns to his bleoved city on Sunday for a concert at St Canice's Cathedral

The world-acclaimed Kilkenny violinist, Patrick Rafter, returns to perform at St Canice’s Cathedral in his native city this Sunday at 4pm. He will be joined by one of Ireland’s greatest pianists, Michael McHale.
Tickets are available on the door at €5/€10/€15 or can be reserved at 086 1777 017.
He will perform as part of the Music in Kilkenny Series.
Celebrated and considered one of Ireland’s brightest musical stars, Patrick has achieved roaring success.
A protégé of the world’s greatest violinist, Maxim Vengerov, Patrick has gone on to win competitions across the world and has been hailed as the “next greatest violinist” (Alexander Bailie) by some of the most eminent musicians of today.
A career that is already stratospheric, recent highlights include debuts with Prague Philharmonia and Mannheim Chamber Orchestra, performances at Menuhin Festival Gstaad and even sharing the stage with artists such as Avishai Cohen and Jermaine Jackson.
This season will include debuts with London Mozart Players, returns as soloist in March 2019 to RTE Symphony Orchestra alongside Vengerov and solo performances across some 20 countries.
Born and raised in Kilkenny, son of Maura and Paddy Rafter, Patrick went on to graduate with top honours from one of the most prestigious schools of music, the Royal Academy of Music, London
Michael McHale
Michael McHale is considered as one of Ireland’s greatest pianists and has an international concert career as one of the supreme stars in piano.
A myriad of recordings and rave reviews, Michael performs with some of the most esteemed orchestras of today including Moscow Symphony, London Sinfonia, Halle Orchestra and has regular solo performances with Ireland’s RTE and Chamber Orchestras.
Born in Belfast, his stellar career has taken him from Wigmore Hall London to Tokyo and as far as the Lincoln Centre.
He has regular collaborations with Sir James Galway and Dame Felicity Lott.
The programme for the night will include Bach, Mozart, Franck and Ravel.
This exceptional duo first performed together in 2009 as winners of the International Clandeboye Young Musician of the Year.
They have major performances planned in Ireland, the UK and further afield in 2019.
A breathtaking night of world class music is in store. Witness two of Ireland's International stars in Kilkenny city.