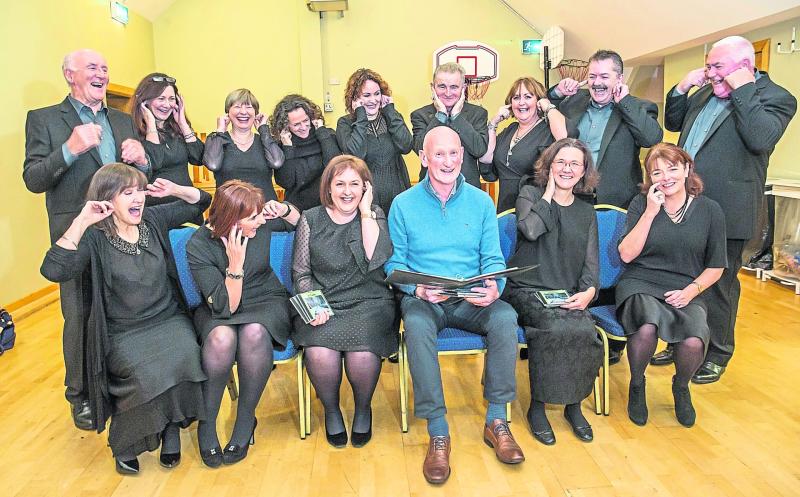 As Kilkenny sweltered over the summer, the dedicated choir known as In Caelo gathered to perform, and ultimately record, their first ever Christmas CD.

Hard to imagine that during those balmy evenings, ‘In the bleak mid winter’ was being sung out at St Columcille’s Church in Inistioge.

A passing visitor to Inistioge, and there are plenty of those throughout the year, must have thought the talented singers were suffering from sun-stroke.

That song turned out to be one of a dozen, classic numbers which made the ‘final cut’ for the first ever Christmas CD from In Caelo, called ‘Christmas Tide’.

And on Sunday last, November 25, a month to the day before Christmas, people near and far came to the Cois Abhann to listen to a selection of songs from In Caelo, some favourites and those that are now on the CD.

The CD was launched by Kilkenny senior hurling manger Brian Cody, who was introduced to the large gathering by another hurling legend, and choir member, Eddie Keher.

Eddie outlined both the glittering playing and management career of the most successful hurling manager ever, and detailed the immense.

And while by his own admission, Brian would not be an expert on choral singing, he was very much impressed with their performance and team work - noting the moves of the choral director and suggesting jovially that they would be put to good use on the sideline in terms of instructing the team with the same efficiency as the choir was conducted. In Caelo were formed over 10 years ago, have performed throughout the South East and on RTE. One song performed on the night, ‘Carol of the Bells’ was really something special and worth the €10 for the CD alone.