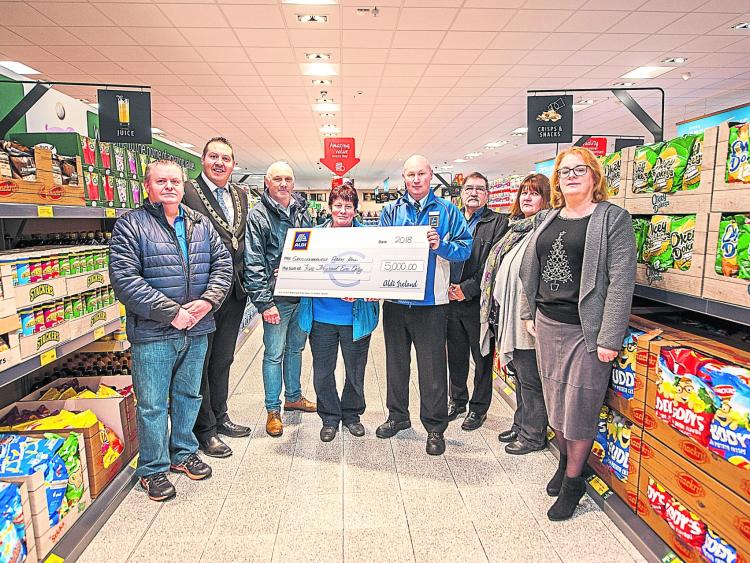 Aldi has increased its presence in Kilkenny with the opening of its latest “Project Fresh” store in Graignamanagh.

A total of 20 new jobs have been created at the new store.

The opening saw a welcome boost for Graignamanagh Abbey Hall, with Aldi donating €5,000 to help support this important local amenity for the benefit of the community at large.

Abbey Hall Committee members joined in the opening day celebrations, where they were presented with their cheque in store.

On hand to officially open the new store was Mayor of Kilkenny, Cllr Peter ‘Chap’ Cleere, who together with Aldi’s Graignamanagh Store Manager David Rossiter, welcomed customers who had queued from early to see inside the new store.

Bringing great quality, fresh Irish products and fantastic value to customers, the new Graignamanagh store is Aldi’s fourth store in Kilkenny. Aldi now has a total of 136 stores in Ireland.

Aldi’s Kilkenny stores have donated more than 29,000 meals to charity through FoodCloud, saving charities over €40,000.

The new store is part of Aldi’s €160 million investment in its Irish store network. Aldi has committed €100 million to constructing and opening 20 new stores by the end of 2019, while Project Fresh sees Aldi invest a further €60 million in revamping the layout and design of all its 136 stores nationwide.

Speaking at the store opening, David Rossiter, store manager said: “The opening of Aldi Graignamanagh is great news for local shoppers as we have the best grocery prices in Ireland.

“Our Swap and Save campaign launched in May and the goal of this campaign is to remind shoppers about the saving that can be generated by swapping their weekly shop to Aldi,” he said.

“The spacious awardwinning Project Fresh design of our new store makes for an easy and enjoyable shop.”

Officially opening the new store, Cllr Peter ‘Chap’ Cleere, Mayor of Kilkenny, said: “There has been considerable interest and excitement in our area over the last couple of months regarding Aldi’s new store opening.

“The overwhelming majority of people I have spoken to are in favour of this and are absolutely delighted, it’s a major boost for the area.

“It will be a huge help to those who have to travel out of town to do their shopping, meaning that more money will stay in Graignamanagh, with shoppers in turn picking up extras in the town centre.

“This is very much a ‘win-win’ situation for Graignamanagh, as Aldi has made significant contributions to the access area around Well Lane, including new public lighting, tarmac and railings which will be a huge and welcome addition to the town. I would like to wish Aldi the very best of luck with their new store,” he said.