Kilkenny's young coders making a name for themselves 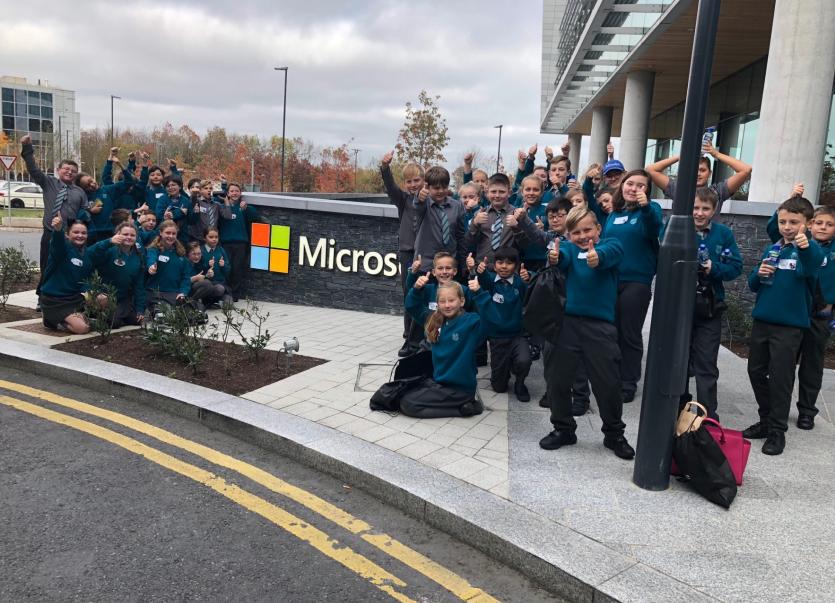 In years to come, several of Ireland’s tech entrepreneurs may pay tribute to their alma mater of St John’s Senior School in Kilkenny where the seeds of their tech expertise were sown.

The primary school is pushing the envelope when it comes to STEM education, after establishing two separate after-school clubs in coding and robotics. It’s also been selected by the Minister for Education and Skills as the base school in Kilkenny for the network of ‘Creative Clusters’ as part of the Schools Excellence Fund and the Creative Ireland Programme.

The school’s young coders are already making a name for themselves. They recently visited the much-lauded Microsoft Dreamspace in Leopardstown where they practiced their coding, explored augmented reality and brainstormed about the technology of the future.

Now, the young coders have been invited by Institute of Technology Carlow to compete in a Vex Robot Challenge. ‘KidKoders’ — named by the pupils —  meet every Wednesday after school and the 14-strong group is about to increase to over 20, following the purchase of additional iPads by the school’s Board of Management.

KidKoders is currently open to fourth and fifth class pupils but St John’s Senior School’s long-term goal is to have a junior and senior club with the seniors mentoring the juniors. The pupils learned ‘Scratch’ (the MIT coding platform) as the base from which their coding knowledge would build and, this term, are progressing to the programmable robot Edison, Microbits and LegoWeDo.

ROBOTICS
Separately, the Robotics Club meets on Monday after school and comprises pupils from sixth class, who are more involved in design and construction than the coding group. Late last year, the Robotics Club was lucky enough to receive a Vex IQ robot from IT Carlow and the pupils are now tasked with building their own VexIQ robot — affectionately christened ‘Kevin’ — from scratch, and controlling it remotely to perform various tasks. The club was recently invited by IT Carlow to take part in the regional Vex competition.

Both KidKoders and the Robotics Club are the brainchild of and run by St. John’s Senior School teacher Anna Marie Feeley.

“Many of the children we teach will probably be employed in jobs that haven’t been created yet, but computer literacy will more than likely be a large component of them,” says  Ms Feeley.

“The skills they learn while coding are useful in all aspects of their future life. In KidKoders they learn to work together, they definitely learn patience and their own confidence has really developed.

“The buzz on Wednesday afternoons is electric and the children feel very empowered with their new skills. For me, my greatest achievement to date has been watching the growing confidence in all of them but, in particular, in some who would find the usual learning environment difficult. In KidKoders, those children are leading the way.

“We recently had a visit from Margaret Maxwell, Director of the Kilkenny Education Centre. She was chatting to the coders and one girl was developing a counting programme for the junior school.”

KidKoders and the Robotics Club complements St John’s Senior School’s selection as the base school for Kilkenny, and just one of 68 schools nationwide, to participate in a network of Creative Clusters as part of the Schools Excellence Fund and the Creative Ireland Programme. St John’s Junior and Senior Schools and Loreto Secondary school are the only Kilkenny schools selected for the initiative that uses art and creativity to achieve better learning outcomes.

St John’s Senior School will work on a project with the tech team in Loreto Secondary and mentor the junior coders in St  John’s Junior School. Plans are also in train to develop a maths game that can be used in all classes in the school.

“This project really compliments our KidKoders and Robotics clubs and has enabled us to team up with the Loreto Secondary School Tech team under Fiona McGrath, and St John’s Junior School coders led by Tom Deevy, and all overseen by Shane Egan,” says principal of St John’s Senior School Brian Roche.

“Our project is using the coding clubs in all three schools to aid the transition from the junior school to the senior school and the senior to secondary. Our coders have visited Loreto twice last term and have several more visits planned as part of the project.

“This term and next we will visit and host the junior school while mentoring their coders in Scratch Jnr and BeeBots. Funding is always an issue for schools and this project has allowed all schools provide both the skills and equipment to activate our plans.”