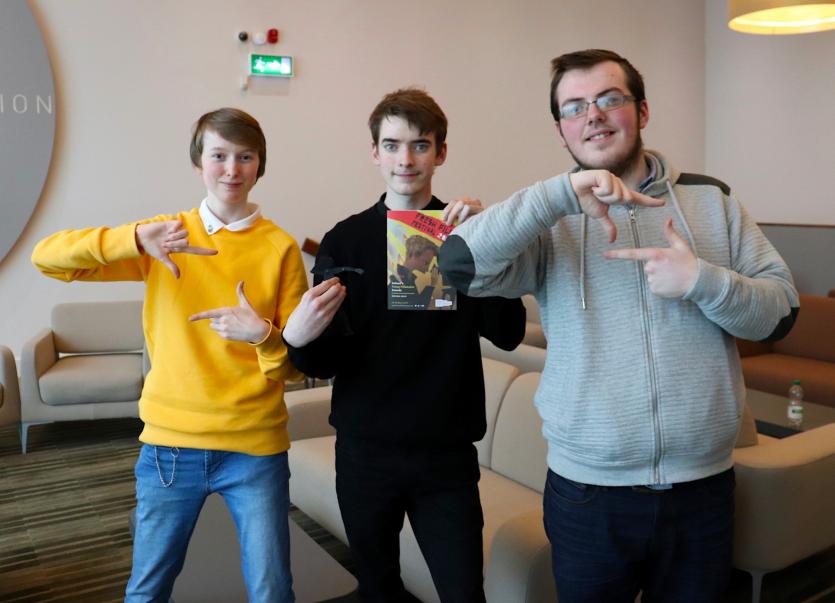 Ireland’s Young Filmmaker of the Year 2019 moved one step closer to crowning its winners by announcing some of its finalists yesterday, Wednesday.

Finalists from Kilkenny included Young Irish Film Makers and the National Youth Film School, who have three films through to the final, ‘The Odyssey of Annette’ and ‘Smokes’ and the Animation School Students with their film ‘Sand Animation’.

Other finalists included 16 year old filmmaker Katie McKenna from Kilkenny with her film ‘Shell’ which explores terrorism. The short film follows a young girl who is placed in an unfortunate situation, which brings up the question, “What if it happened here?”. Last year, McKenna spoke at an Ombudsman for Children event, which represents children’s rights. McKenna spoke about being at the heats as “really exciting and a fun experience”.

The competition, which received a record of over 1,700 entries this year, announced which short films would move on to the finals at the Leinster regional heats, which took place at the Odeon Cinema, Point Village in Dublin, along with the Dublin regional heats, which took place at the Irish Film Institute. Films by young filmmakers from the Netherlands, Denmark, the United States and Canada were also screened as part of Fresh Film Festival’s International category.

Films shortlisted for the final will be screened at Fresh Film Festival 2019 in Limerick from March 25 to 30 and Ireland’s Young Filmmaker of the Year Awards will be presented on the March 27 for the Junior category and March 28 for the Senior category. Other highlights of Fresh Film Festival 2019 include feature screenings and workshops including an Industry Master class with The National Youth Film School.

Now in its 23rd year, Fresh Film Festival encourages young people from Ireland and overseas, aged 7 to 18 years, to create, exhibit and share films. The festival provides an opportunity for these young filmmakers to have their work seen on a cinema screen for the first time and to compete for the title of Ireland’s Young Filmmaker of the Year.  All films submitted are also considered for a range of Specialist Awards including the Radharc Trust Award(documentary), the Boulder Media Animation Award, the RTE 60 Second Short Film Award and the RTE Factual Award, in addition to the International and Audience awards.

"Ireland’s Young Filmmakers have a very interesting approach," says Jayne Foley, Director of Fresh Film Festival. “Storytelling is at the core," she says, “because the budget is usually either low or non-existent, film-makers have to be very inventive with plot and location.” This year the festival received over 1700 films into its three categories Junior, Senior and International. Jayne adds, "The festival is a forum where young film-makers can meet each other. Even at that stage networking is important. You may end up meeting the same people again later in your career. As advocates of young filmmaking, we also try to showcase films abroad. We've brought Irish films and young filmmakers to Korea, Palestine, Austria, Germany, and Edinburgh. This year we are excited to have a number of International young filmmakers coming to Fresh and sharing their filmmaking experience with us.”

Fresh Film Festival encourages young people to make films by hosting an annual international film festival for young people, presenting Ireland’s Young Filmmaker of the Year Awards, acting as an advocate for young filmmakers and promoting their work worldwide.  Fresh runs a number of initiatives throughout the year, including a Hothouse programme designed to bring young people of different ages and diverse backgrounds together to share their film experiences and create new collaborative work, as well as distributing Irish films made by young people to festivals all over the world.  The Arts Council of Ireland, Limerick City and County Council and RTE Supporting the Arts support the Fresh Film Festival.

Further details are available from www.freshfilmfestival.net.