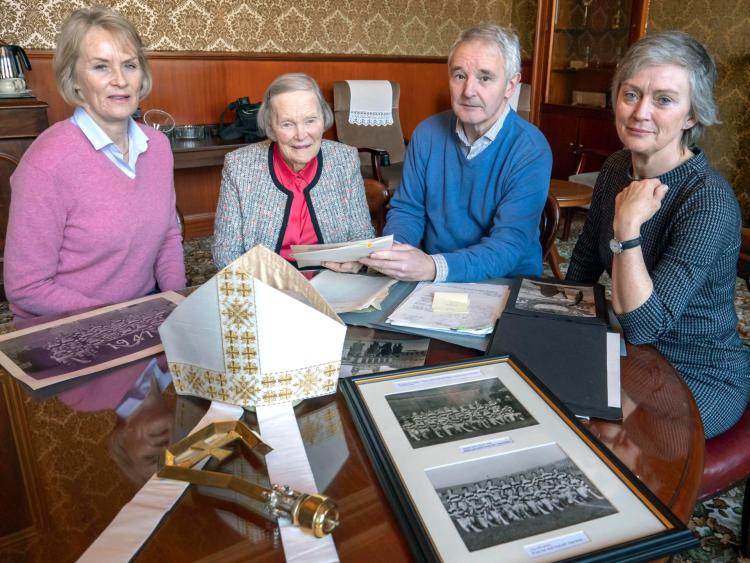 Presenting the collection to John Kirwan, Curator are his sister Alice O’Byrne with her daughters Dervilla and Darina Picture: Michael Brophy.

The sister, Mrs. Alice O’ Byrne and nieces, Dervilla and Darina O’ Byrne, of the late Archbishop Thomas White, who died 7 May 2017, visited Kilkenny Archives last week to present more photographs, documents and artefacts which had belonged to the late archbishop, a Laois born, Ossory clergyman and Holy See diplomat.
Kilkenny Archives is based on the St. Kieran’s College Campus, where the young Tom White received his secondary education.
The main part of the collection which the family gifted last year, includes a series of letters written by three noted Ossory bishops : Rev. Patrick Collier, Rev. Peter Birch and Rev. Laurence Forristal.
The family have also gifted further personal effects relative to Archbishop White’s world-wide ministry. Thomas White was born, one of a family of five, on August 12 1931 to William and Bridget White. After his early education at Cullohill National School, Laois, he progressed to Saint Kieran’s College, Kilkenny. While there Thomas enjoyed outstanding academic and sporting successes.
He was part of the College’s senior hurling team who won the Leinster Championships in 1947. The future archbishop also studied for the priesthood in Saint Kieran’s College and later in Rome where he was ordained for the Diocese of Ossory on 25 February 1956. Released by his bishop, Rev Dr Patrick Collier from a commitment to teach Canon Law at Saint Kieran’s, the newly ordained Thomas entered the diplomatic service of the Holy See.
Archbishop Thomas White was only the second Irishman in the history of the Church to have served as a Papal Nuncio in a country where he did not already hold an episcopal rank. After his retirement from the papal diplomatic service in 1996, Archbishop White carried out several important missions for the Vatican Secretariat of State, including liaison work with the church of the Syro-Malabar rite in India.
Archbishop White upon retirement lived in Blackrock, Co. Dublin. Later he moved to Saint Kieran’s College and later still to Gowran Abbey Nursing Home where he died. He lies buried in the grounds of St. Mary’s Cathedral near Bishops Collier, Birch and Forrestal.