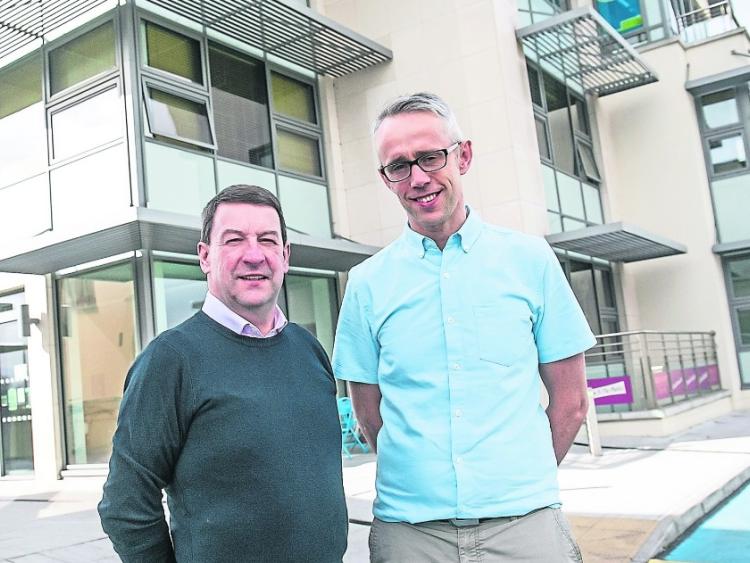 After losing 4 stone and 4 lbs weight, Cllr Pat Fitzpatrick has reversed type 2 diabetes and turned his life around dramatically. He is pictured here with his GP, Dr Frank Chambers PICTURE: Pat Moore

A local politician once four stone overweight has given hope to those diagnosed with type 2 diabetes by defying all the odds and reversing a life-changing condition.
Cllr Pat Fitzpatrick lost over four stone weight after his doctor told him that unless he changed his lifestyle his health would deteriorate dramatically.
On January 1, 2018 he was told he had type 2 diabetes.
“I was shell-shocked, had no energy and I was struggling,” Pat admitted.
“When you tell someone they have diabetes it is a serious adjustment for a patient both physically and psychologically,” his GP, Dr Frank Chambers of Ayrfield Medical Centre said.
“When Pat was diagnosed he was devastated and vowed to lose the weight,” Dr Chambers said.
“Pat has proven me wrong as I didn’t feel he was committed to such levels of weight loss. That’s because he is in a high risk occupation for poor lifestyle habits; politics, which is a tough occupation to save your soul and keep your health.
“He has reduced his burden for medication and reversed the potential damage to his system.
“Pat’s commitment is not an easy intervention and will only work for those committed to serious lifestyle modifications,” Dr Chambers added.
“Pat has shown that the evidence for weight loss is impressive and more investment should be placed in weight loss in primary care medicine.
“The current guidelines for diabetes are very medication centred and weight loss is often given lip service,” he admitted.
“Pat now has greater life expectancy, reduced medication needs and lower insurance costs as a result of the weight loss,” he said.
“It proves that diabetes is not inevitably progressive as we often see it as a life sentence,” he admitted.
“This challenges the perception and ongoing research is challenging the presumption that this is a lifelong condition for all.
“Studies are showing weight loss is linked with remission of the condition.
“The catch is if you regain weight the diabetes will return,” Dr Chambers added.
For Pat, it has been a life changing experience and he faces into the local elections on behalf of Fianna Fail in May, knowing that he will be able for the rigours of the campaign.
“I had great support from Dr Frank and my family on this journey and I just cut out all sugars and stopped eating late at night and going to chippers,” he said. Now he has porridge for breakfast, a salad for lunch and tea.
If he does get tempted, he takes a drink of water and it takes away the craving. He certainly won’t be going back to a sedentary lifestyle.