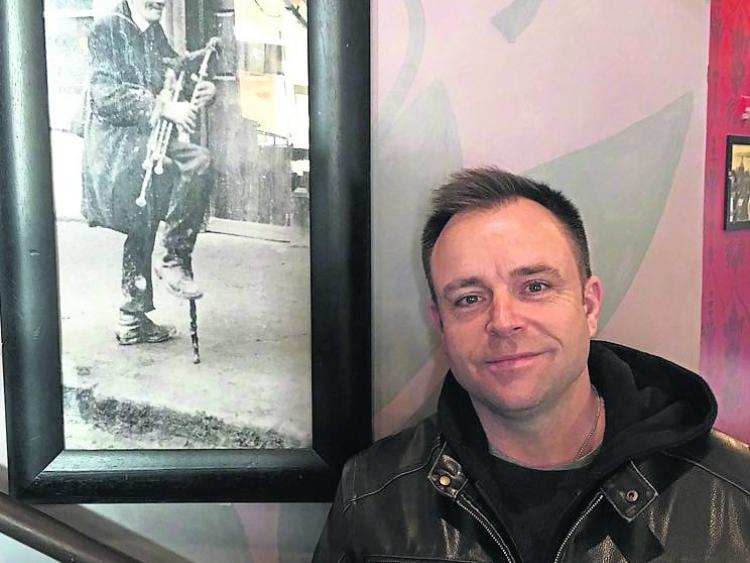 Darren Holden of The High Kings in Maryland, USA with a photo of his paternal great grandfather, James Byrne taken in 1921

Mooncoin singing legend, Darren Holden was sitting in his hotel bedroom in Annapolis, Maryland when he got a call from fellow High Kings band member, Brian Dunphy, ordering to come down to an Irish themed pub in the centre of the US city.
A photo hanging on the wall of the bar was to provide Darren with a history lesson on his own family and one of the highlights of the sold-out tour of the United States by the folk super group.
It also brought back memories of the black and white still that he hadn't seen since he was a child.
The picture was taken in the summer of 1921 in Tullamore, County Offaly.
It shows his paternal great grandfather, James Byrne on the street playing the uileann pipes with a staff for support.
He was a travelling musician who was popularly known as Jem and his life style may explain from where Darren brought the love of music and performing.
“It's amazing that I came over to Maryland, to the Fadó Irish Pub in the state capital of Annapolis to see a photo of my great grandfather playing the pipes,” he said.
Darren will return from the America today (Wednesday) after being away from home for five weeks on the High kings 10th anniversary tour, playing allover the States where they received rave reviews and had the sold-out signs on almost every auditorium they played.
The High Kings US Tour began in Memphis this Saturday, February 23 and finished in Helena, Montana on Sunday night.
The tour covered some old favourite locations as well as some brand new ones.
The High Kings are hugely successful and were formed in Dublin in 2008.
The band consists of Darren along with Finbarr Clancy, Brian Dunphy, and George Murphy.
By June 2016, the group had released four studio albums, two live albums, and two live DVDs.
Their first three studio albums appeared at number three or higher on the Billboard world music chart,] the first two went platinum in Ireland and all of their albums charted in Ireland.
Their latest, The Best of the high kings has also sold very well.
After the release of their first album, the new group moved from a highly staged format to a more natural performance style.
Their third album Friends for Life contains traditional Irish songs, as well as some original songs.
Since the inception of the band, The High Kings has toured Ireland, the United States, and Europe on multiple occasions.
Together they play 13 instruments during their performances.
The group's motto is Folk 'n Roll, and their singing is especially noted for its close harmonies.