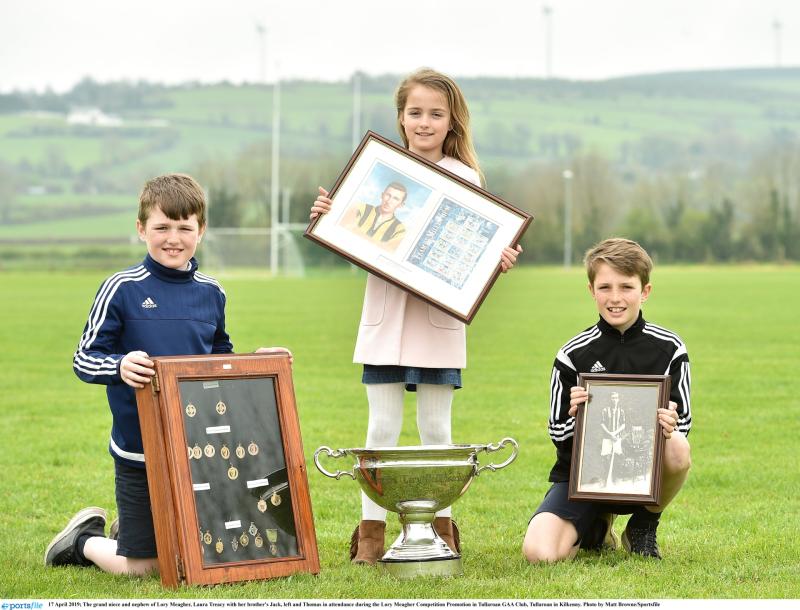 The grand niece and nephew of Lory Meagher, Laura Treacy with her brother's Jack, left and Thomas in attendance during the Lory Meagher Competition Promotion in Tullaroan GAA Club, Kilkenny

The Gaelic Players Association (GPA) have kicked off the summer of hurling with a promotion of the Lory Meagher Cup in Tullaroan GAA Club. 2019 marks the ten-year anniversary of the competition which has contributed significantly to the development of hurling and provided a pathway of progression to many counties in recent years.

Following on from Sligo’s success in 2018, this year Lancashire, Leitrim, Cavan and Fermanagh will compete for a coveted place in the final in Croke Park and the ultimate prize of promotion to the Nicky Rackard Cup in 2020.

This afternoon saw players from the three of the four counties playing in the 2019 Lory Meagher competition come together to help raise the profile of the competition, its heritage and its players and relatives of Lory attended the event.

The Lory Meagher Cup was named after former Kilkenny hurler and three time All Ireland winner Lory Meagher who many regard as one of the greatest hurlers of all time. The launch was held in Tullaroan, the home club of Lory Meagher, bringing the cup back to the area where it originated. The launch aimed to tie the history and culture of the competition to the players who are competing in it today. Club Chairman of Tullaroan, Dick Walsh, hosted the group on the day.

Speaking about the launch Paul Flynn, CEO at the GPA said, “The GPA have three main pillars player welfare, player development and player representation. Under representation promoting our players and our games is of the upmost importance to us. We are delighted to be working with the teams competing in the Lory Meagher cup to promote this exciting competition. To have the cup back in Lory’s home club is really special and we look forward to the kick off of the competition this summer.”

David McGovern Kelly of Leitrim said, “As a player the Lory Meagher is our All Ireland competition, it’s where we have the opportunity to represent our county on a national stage. The tiered champions is a great idea because it give us a realistic chance of winning a championship and progressing through the different grades.”

This is the first event of a roadshow to kick off the new season hurling competitions for the Joe McDonagh, Christy Ring, Nicky Rackard and Lory Meagher Cup Competitions. Each of the cups will visit their name sake club locations along with the representatives from each team competing in that tier.

The first games of the Lory Meagher competition kicks off with Lancashire against Leitrim in Old Bedians Sports Ground, Manchester and Cavan against Fermanagh in Kingspan Breffni on the third weekend in May (date TBC).