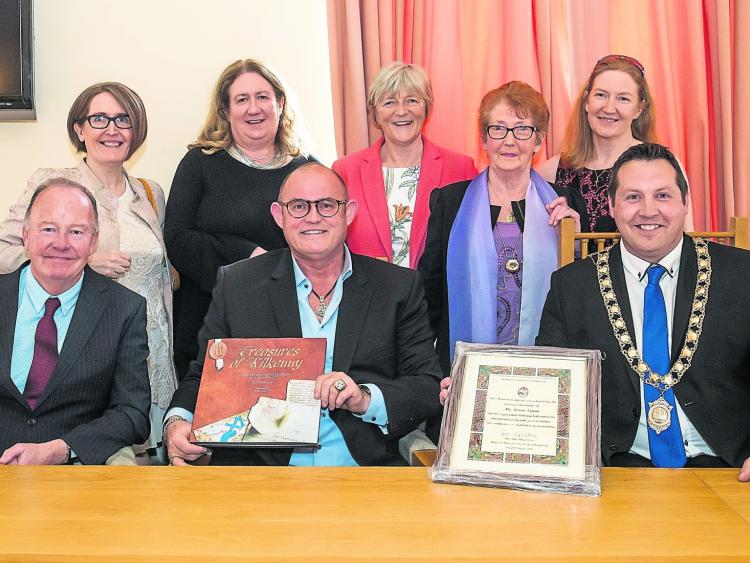 The importance of family and community was highlighted last week by an incredible Kilkenny man who is in huge demand in the US.
Dr Ronan Tynan is one of the world’s most popular tenors and recently sung at the funeral service of former US president, George Bush senior.
The Johnstown man who is also a medical doctor had the small gathering in City Hall in awe as he spoke glowingly about the impact his late parents, his brother, sister and the rest of his clan had on him, at a civic reception in his honour on Wednesday evening of last week.
As a professional singer, he regularly rubs shoulders with royalty, former US presidents and Hollywood actors.
He came home to his native place last week to receive the civic reception, to do a bit of farming and see a few mares foal.
One thing that was uppermost in his thoughts at the event was the need to encourage young people.
Encouragement
He intimated that the kindness and words of support he received from his mother and father made a huge difference to him as he set out to conquer the world after losing both legs to a degenerative condition.
“Getting that encouragement at the start brings you to a different level, gives you a solid attitude,” he said.
Looking down at his sister Fiona in the audience he said that in Kilkenny, like Bruce Springsteen; “we take care of our own.”
One of the most charismatic people ever produced by Kilkenny, he declined the offer to sing after a hectic schedule over the previous few weeks, but said he is looking forward to performing at Ballykeeffe amphitheatre on Saturday, August 10.
Family friend, and the man who organised the event, Councillor Michael McCarthy of Freshford said it was a great honour for him to be there and recalled playing cards with and against Ronan in Freshford.
Mayor of Kilkenny, Peter ‘Chap’ Cleere complimented Ronan on his singing exploits, but also acknowledged his sporting achievements, having represented Ireland in the 1984 and 1988 Summer Paralympics winning a combined four gold, two silver and bronze medal. He has also set 14 world records in his athletic career.
“Ronan has performed at many national and international events such as Ronald Reagan’s funeral where he sang to an audience of 35 million people and more recently at George Bush senior’s State funeral in America.
“He is a big man, with a big voice and an even bigger heart,” he said.
Mayor Cleere thanked Cllr McCarthy who was instrumental in facilitating and organising the Mayoral Reception with the Tynan family.