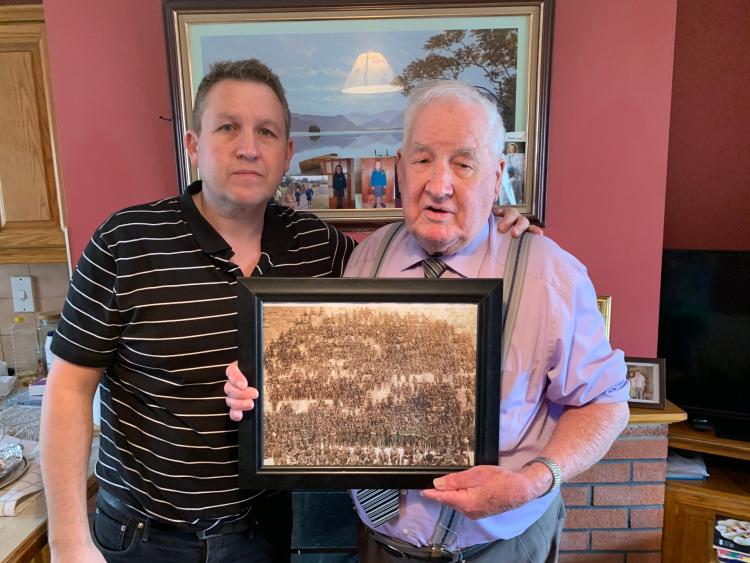 Peter Dwyer with his father, also Peter with a picture of the regiment with John Dwyer in it

A Kilkenny man who fought for Australia in World War I but whose memory all but slipped into obscurity was finally recognised by his adopted country at the weekend.
For the last 70 years John Dwyer, a native of Clara, Co Kilkenny, was buried in an unmarked grave in a Western Australian cemetery.
Details of his life and final resting place were only pieced together late last year by his great grandnephew, Peter Dwyer from O’Loughlin Road, Kilkenny city.
Peter flew to Perth last last week to attend a special ceremony to dedicate a headstone on his ancestor’s grave.
His own father, Peter Senior and the nephew of John, was not able to make the journey, but Peter was accompanied by his father-in-law Edward Somers.
Peter shed a tear at an emotional graveside gathering as military honours, including bag pipes and The Last Post on a bugle, sounded for him as men dressed in military uniforms of the time provided a guard of honour.
Honorary Irish Consul Marty Kavanagh read WB Yeats poem ‘An Irishman foresees his death’ and recognised his “life, decency and sacrifice” on behalf of the Irish government.
Several members of the Irish community in Perth - including Dublin born WA state government minister Stephen Dawson - veterans, representatives from the Returned Services League and descendants of other soldiers who served with him attended the event at Karrakatta Cemetery, in Perth’s western suburbs.
Emotional Journey
“It’s been quite a journey to get here, emotionally and literally,” said Peter.
“To discover John’s story and within six months to be here for a dedication to his memory is quite surreal.”
Peter said that the family lost all trace of John when he emigrated to Western Australia in about 1911.
But when he went looking for information about him late last year he was surprised by the amount of Australian military records he found about him online.
John was in WA’s goldfields region when World War broke out and he was one of the first ‘Australians’ to enlist with the Australian Imperial Force.
He joined the 11th Battalion was in the first deployment of Australian soldiers - commonly called Diggers - sent to Egypt and then onto Gallipoli (the Dardanelles) in Turkey.
The Gallipoli invasion which started on April 25, 1915 was the first time the country had gone to war as Australians, having become an independent nation (from Britain) on January 1, 1901.
Gallipoli proved to be a military failure for Australia (and the Allied Forces) but the values of mate-ship, sacrifice and bravery the Diggers showed during this campaign - their first of WWI - and the date of their landing have been celebrated every year since as a national day of commemoration called ANZAC Day (Australia and New Zealand Army Corp).
Lance Corporal John was injured in the fighting at Gallipoli and after a period of rehabilitation was returned to his Battalion and the battlefield until Australia’s 20,000 troopers were evacuated from the bloody quagmire under the cover of night in December 2015.
John also served in France and saw some of the heaviest action of the Great War. He was wounded further but survived the conflict.
Respectful Tradition
Peter said Australia has a long and respectful tradition of honouring Gallipoli and its war dead and he is proud his grand uncle’s place in it has been finally recognised.
But he said it is one that Irish people could also embrace.
“On the day of the April 25 landings, there were two Irish regiments (of the British Army) the Munster Fusiliers and the Dublin Fusiliers,” he said.
“They lost so many men that they had to be amalgamated and became known as the Dub-Sters.”
About 4,000 Irish men were killed at Gallipoli - with many thousands more injured - about half the number of Australian and New Zealander fatal casualties.
“John returned to Western Australia and what had always been a tough life for him, continued after the war,” Peter added.
“He died in 1950 from cancer, having suffered all his life from his war wounds but I take some comfort from the fact that the RSL branches wherever he was supported him and that in the last two years of his life he was cared for here in Perth in an old repatriation hospital for soldiers.
“John did not have any riches but now his good name will live on forever and be remembered.”
Peter’s father of the same name and John’s nephew was not able to make the journey with him but his father in law Edwards Somers from Westmeath did accompany him.
ANZAC Day (April 25) is the last day of their short visit to Perth but the two men plan to attend the Dawn Service in Kings Park, Perth, which attracts up to 50,000 people and is the biggest of its kind in Australia.
Parade
The two men have been invited to march in the ANZAC Day parade through Perth by the 11th Battalion Association.
Serving military personnel, veterans and family members wearing the service medals of their loved ones who served are entitled to parade.
Peter’s father in law said his uncle had enlisted with the American army and was amongst the soldiers who landed at Omaha Beach as part of D-Day, June 6, 1944.

Lloyd Gorman is editor of Irish Scene magazine www.irishscene.com.au and a reporter with the POST Newspaper in Perth and attended the headstone dedication ceremony