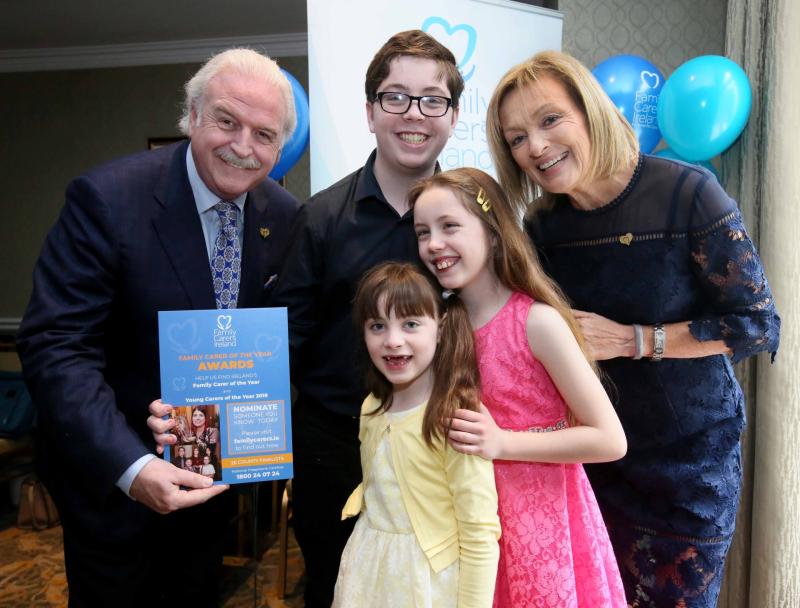 ictured with Mary and Marty are current Young Carers of the Year, Harry (14) and Molly Flynn (11) from Ferrybank, Waterford/Kilkenny who care for their little sister Isabelle (7)

Three well-known local children were on hand to help launch the annual Carer of the Year awards for 2019.

Harry and Molly Flynn from Ferrybank are currently Young Carers of the Year. They are siblings to Isabelle Flynn, who has Cerebral Palsy and Apnoea which causes her to stop breathing.

The Flynn family were told she would never walk, talk or have the use of her hands or legs, but through Harry and Molly’s constant attention and support they have taught her how to sit up, crawl, to hold a spoon and feed herself. They have also saved her life on numerous occasions by performing CPR when she stopped breathing on a bouncy castle, at the beach and in a shopping trolley. The pair were last year honoured by Kilkenny County Council with a Civic Reception for their work - and a Kilkenny People of the Year award.

Family Carers Ireland take pride in recognising the huge sacrifice and commitment made by Family Carers in Ireland through the Carer of the Year Awards. Ireland’s Family Carers are providing on average 45 hours of care each week in their homes with many providing 24/7 care. The impact financially, socially and in terms of their own physical and mental health can be immense.

“Family carers play a key role in alleviating the ongoing problems within our health care system such as bed shortages, over-crowding and long waiting lists. The dedication and sacrifices made to achieve this are often overlooked and not fully understood. The awards offer an opportunity for family carers to be acknowledged in their own right," said  Catherine Cox, Head of Communications.

Family Carers Ireland encourage communities, health professionals, friends and families of Carers and Young Carers to nominate them for the 2019 Carer of the Year Awards. Nomination forms are available online at www.familycarers.ie or through contacting the Freephone National Careline 1800 240724.

The Carer of the Year Awards will be presented at a ceremony in Dublin, in November 2019.  See www.familycarers.ie.