Anger grows as still no response on Kilkenny MRI

'The Minister has visited Kilkenny, he knows the need that exists, he assured the people of Kilkenny it would happen, and yet he can’t give any indication of when it might happen' 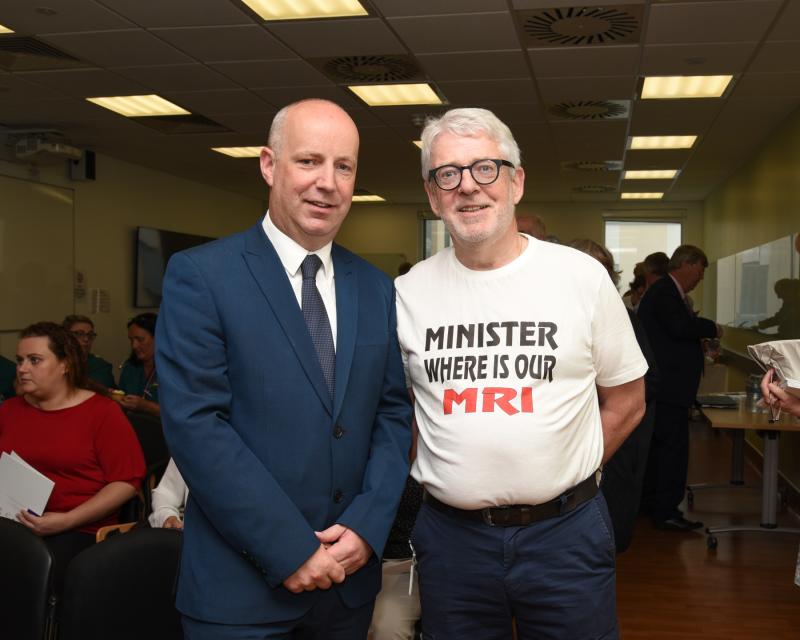 Chairman of the Friends of St Luke’s Hospital Declan McCann says he is still waiting to hear from the Minister for Health for an update regarding the planned MRI scanner for the local hospital.

“I am really disappointed he hasn’t responded to the letter about the meeting we requested,” he said.

“That’s despite him saying he would be back in June to talk about the issue.”

Mr McCann was at St Luke’s on Monday, wearing a ‘Where is our MRI, Minister?’ t-shirt to greet visiting Minister of State Jim Daly.

“I asked [Minister of State Daly] if he would make contact and asked about the letter and us seeking a meeting.

“Mr Harris is the Minister for Health, and he has the power to make this happen. He said he was releasing the funds. So I would like to see him get on with it and honour his word.”

Last Tuesday marked a year to the day since Minister Simon Harris visited the local hospital and announced he would release the outstanding funds for the project to go to tender. He initially had said the machine was to be up and running this year, but it is evident this will now not happen.

Fianna Fáil TD for Kilkenny, Bobby Aylward, has expressed his deep frustration at the latest response from the HSE and Minister for Health. He has been questioning the Minister for Health over the long promised and long awaited scanner since late last year and said it's disappointing that even though the Minster gave assurances, there is still no sign of funding.

“The Friends of St Luke’s Hospital group have raised €250,000 locally in an effort to assist in the provision of this crucial piece of equipment - it’s high time we saw the Government put in even a fraction of the same effort," he said.

“The Minister has visited Kilkenny, he knows the need that exists, he assured the people of Kilkenny it would happen, and yet he can’t give any indication of when it might happen. In fact, based on the most recent PQ response I got, there appears to be no guarantees from the HSE that it will even go to tender until funds are allocated in the capital plan.

“Despite us coming towards the end of July, the HSE capital plan, which determines the projects that can progress in 2019, still has not been finalised - it’s absolutely outrageous.

“We know from officials that the HSE was forced to change the capital plan substantially because of the massive overspend on the National Children’s Hospital, but we know little else as it hasn’t been published.

“It is quite hard not to be cynical in relation to the delay and to question why the Government have not yet published it. Is it because they know that there will be capital projects such as the MRI will be postponed? It’s time for some cast iron guarantees."

Last week, Cllr Pat Fitzpatrick brought a Notice of Motion to the July meeting of Kilkenny County Council, which was agreed by all members.

The Notice of Motion read: “Kilkenny County Council calls on the Minster for Health to immediately release all outstanding funds to allow the MRI Scanner Project in St Luke’s Hospital proceed with out any further delay.”